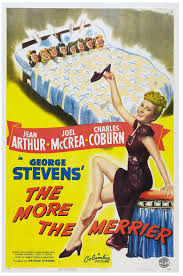 ”You look like a high-type, clean-cut, nice young fellow.”

What’s really hard with a movie this delightful is to write just about one scene, even a scene this great.

A brief digression: I’m posting this an hour before leaving for Ireland, and any errors I’ll have to ask you to be kind about. You know what they say: Post in haste, repent at leisure. But I really wanted to be part of Sister Celluloid’s And Scene! Blogathon (see links below), so here goes. As Mr. Dingle would say, “Damn the torpedos! Full speed ahead!”

You know how people kiss in classical Hollywood movies, with very rare exceptions (Clark Gable kisses the bejuses out of Vivien Leigh in GWTW, for example), but mostly when the lovers, having pledged their passion, finally get around to kissing they carefully place their faces together and their bodies completely stop moving. It’s like ventriloquist kissing—it’s a kissing marker, not an actual expression of passion or intimacy. And there are several reasons for this. Some actors just aren’t good screen kissers. Herbert Marshall springs to mind. In Trouble in Paradise, at the climax of the sublime opening scene when Lili and Gaston discover each other and fall hopelessly in love, Gaston (Marshall) kisses Lili with all the intensity of a bowl of instant oatmeal. And this was Pre-Code!—not the two-seconds-or-less, one-foot-on-the-floor osculation of the Breen Office.

Once the strict enforcement of the Code kicked in, any hope that the often bland kissing in the movies would ever match the passionate heat of the dialogue disappeared for 30 years.

That’s one reason the kissing scene from The More the Merrier is so delicious and surprising. It’s not long, and it’s not the kind of straight-out sex we’ve come to take for granted in this era of charmless frankness, “letting it all hang out,” as they used to say. But as classic movie lovers you know how much desire and heat can be transmitted and still stay within the rules of the Code. I feel safe saying that for many of us, the momentary flashes are more satisfying than a 10-minute full-out sex scene.

So. The scene. It’s the pivotal scene in the movie, the end of the second act. In Act I George Stevens gives us the setup: wartime Washington, D.C., overrun with military and civilian war workers, is in the midst of a massive housing crisis. Connie Milligan (Jean Arthur, never lovelier) is offering half of her apartment for rent just because she’s that kind of girl, she wants to help out. Connie is a walking contradiction: She talks schedules and careful planning (she used to work in the Office of Facts and Figures) and is engaged to marry a dull middle-aged bureaucrat, Charles J. Pendergast, who she always calls “Mr. Pendergast,” and she’s trying awfully hard to convince herself that she’s a “very lucky little lady” (ugh), but she keeps a diary and dances the rumba alone in her room—a secret romantic side that she doesn’t even acknowledge to herself. Mr. Benjamin Dingle (Charles Coburn in an Oscar-winning performance) is a determined older gentleman who doesn’t take no for an answer (“Damn the torpedos! Full speed ahead!”). He walks past all the applicants waiting on the stoop like he already lives in the building, and then he persuades a reluctant Connie to take him on as roommate.

Mr. Dingle has formed the opinion that what high-strung but very attractive Miss Milligan needs is a man, a man who is *not* Charles J. Pendergast. And the next morning, when he sees Joe Carter (Joel McCrea) waiting on the stoop clutching the classified ad about the apartment for rent, he looks him over for two seconds and decides Joe is just the “high-type, clean-cut, nice young fellow” Miss Milligan needs. So he does what anyone would do: rents Carter half of his half of the apartment, without consulting Connie. In one of the movie’s many lovely set pieces Connie and Joe, not knowing of the other’s existence, dance the rumba in different rooms of the apartment, alone but simultaneously, to “What Is This Thing Called Love?” By cutting between the two as they dance to this particular song Stevens tells us that Connie and Joe are already on the same wavelength, before they’ve even met. A few minutes later they do meet, Connie flummoxed and angry to find a stranger ensconced in her home, and she orders both Dingle and Carter out. But the two guys push back, and Connie lets herself be talked into letting them stay for the week. End Act 1.

Dancing together, alone—meant for each other but don’t yet know it. (image courtesy http://theblondeatthefilm.com/2014/05/01/the-more-the-merrier-1943/)

In Act II Dingle goes too far in his matchmaking, and Connie *does* throw both of them out. But when she gets home from work she finds Joe packing, and her interest in him is obvious to us (if not to her). Joe is a man of few words, but he gives her a genuine cowhide traveling case as a peace offering, and we see as their faces are close as he shows her the features of the case, that there is definitely something happening between them. Joe and Connie getting to know each other at the windows, as central to the plot as the apartment building?s stoop.

Connie says Joe can stay in the apartment since he’s shipping off to Africa in two days, and Joe says that in his last two days he’d like to see the sights. With Connie. She has a date with Mr. Pendergast but there’s a chance he’ll get stuck in conference, in which case she’ll be happy (more than happy, in fact) to go out with Joe instead. Just as they make for the door, a haze of romance around them, circumstances conspire to keep them in the apartment until Mr. Pendergast calls to say he’s downstairs waiting for her. She goes with Mr. P and Joe goes to meet Dingle for dinner. At the same restaurant as Connie and Pendergast, of course. Dingle shanghais Pendergast for work, leaving Connie and Joe to rumba together (to “What Is This Thing Called Love?”, seemingly their song) and then to make their way, just the two of them, back to Connie’s apartment, and that’s when we get the kissing scene.

It’s a late spring evening. The streets are full of lovers kissing in the shadows (remember, housing shortage, overcrowding). Connie and Joe are walking slowly, Connie making small talk while Joe answers in monosyllables, absorbed in her shoulders (he keeps taking off her little cape to stroke them and she keeps gently removing his hands, still trying to keep up the conversation). Her small talk has a purpose, however: Does Joe have or has he ever had a serious girlfriend? How does he feel about marriage? It appears Joe has never been in a serious relationship and marriage is okay for those who want it, but he “doesn’t want to get involved.” By now they have arrived at Connie’s stoop, and Connie sits down, still trying to convince herself that she’s absolutely thrilled to be approaching marriage to the very dull Mr. P. “I expect to be very happy,” she says. She tells Joe how highly intelligent Mr. Pendergast is, shows him her dinky engagement ring (they decided to put the money into buying a house, very prudent).

When she shows him the ring, saying “Isn?t it nice?” he says fervently, “You bet,” and kisses her hand. She almost passes out.

Only now does Stevens cut to a closeup. McCrea and Arthur, with a gardenia in her hair, both glowing in the darkness and so taken with each other—but Connie is still hanging on by a thread, talking away, more aroused by the minute. Joe, though, isn’t lost at all, he knows exactly what he’s doing, and his caresses grow bolder patiently, persistently, he will not be deflected. When he kisses her neck she about liquidates, pausing in her latest inane anecdote. But she regains enough of her composure to tell Joe how Pendergast saves foreign stamps for her cousin who collects them (“But that’s the way with those older men like Mr. Pendergast—a girl gets to appreciate their more mature…) Joe may not have Mr. P’s “mature viewpoint,” but he has a young man’s passion. Before she can finish her sentence, he gently holds her face and kisses her, and I mean kisses her the way she’s been secretly dreaming of being kissed. And so we bid a fond farewell to the Connie’s pallid dreams of Charles J. Pendergast

Clearly Mr. Pendergast has never done and never will do anything like this. All Connie’s careful planning crumbles as her eyes flutter shut, we see her melting. This isn’t movie mannequin-kissing; this is a slow, deep kiss that makes her head swim. As it ends Connie dizzily finishes her sentence, then she grabs Joe’s face in both her hands and kisses *him*, not the kiss of an ingenue but a woman’s kiss, a vibrant woman, passionate and warm.

And we’re right there with them. Those two kisses, first his, gently but persistently breaking down her reserve, and then hers—assertive, sexual, adult—are the payoff of all Stevens’s meticulous building. It’s a fantastic scene, but it’s the culmination of everything that has come before it. Falling in love with the girl next door?

The More the Merrier is at the moment my favorite romantic comedy, and I’ve watched it over and over to write this little piece. And no matter how many times I see it, this scene is always a delight.

This was written for the And Scene! Blogathon, hosted by Sister Celluloid. Head on over to read more of the amazing posts.