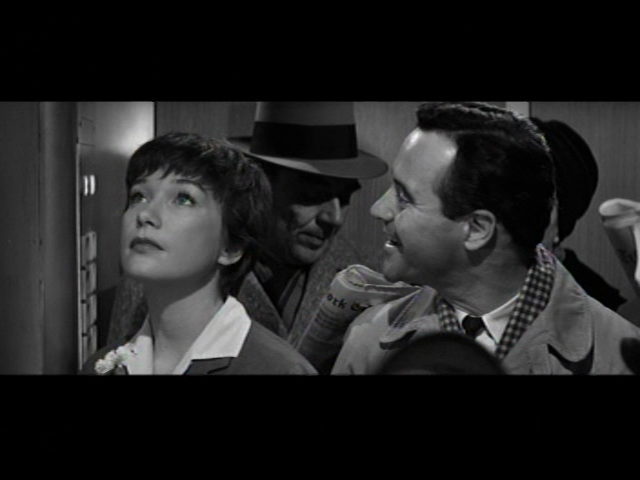 Why do I watch The Apartment whenever it’s on, and why, after all these viewings, do I get a little bit excited every time it’s on the schedule?

Same reason I watch a lot of movies the same way. I watch them the same way I listen to music I love, which is to say, not to see how it comes out but to enjoy every note, to allow new things and pleasures to reveal themselves as they do with repeated, attentive viewings.

But what is it about The Apartment in particular that places it in this special, very personal category? Like Desk Set (1957), it’s a movie set in a Manhattan office where I might have worked, that reminds me of the work world I became a part of when I moved to the city in 1974. The Chinese restaurant in the movie reminds me specifically of a place called Ho Hos, on the ground floor of the Time-Life Building, where we would go in the middle of our overnight shifts for not-very-good Cantonese food, better drinks, and a chance to collect ourselves and rest our eyes from fluorescent lights and copy.

Also, the mensch thing. One of the few decent human beings in the story is Baxter’s neighbor, Dr. Dreyfuss, who hears the goings on through the walls and thinks Baxter is an “iron man.” He straightens Baxter out, tells him to be a mensch, “a human being,” and wonderfully, Baxter follows Dreyfus’s advice. 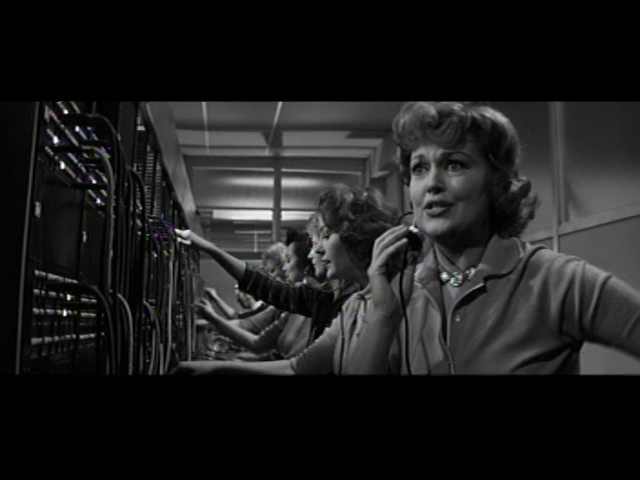 Sylvia: Thursday? But that’s The Untouchables, with Bob Stack!

Like all the best movies, there isn’t an unnecessary shot or word. We get many laughs, but we also get a full panoply of emotions, from fear and disgust to hope and in the last few moments, the unexpected catharsis of a happy ending no less satisfying for being not epic but small, personal—all the things the lovers have been denied in the Manhattan skyscraper where they worked and met.

The casting is perfect. Initially the villain, Jeff Sheldrake, was going to be played by Paul Douglas, but he died soon before shooting began, and Fred MacMurray came in. Douglas was a good actor, but I can’t imagine the movie working with him as Sheldrake. MacMurray brought exactly the right bland menace for the philandering, sadistic insurance company exec, and the audience was so thoroughly convinced they sent oodles of hate mail, which spooked MacMurray. He swore never to play another bad guy, ushering in his My Three Sons and Disney years. Wilder had started talking to Lemmon about playing C.C. (“Bud”) Baxter while they were making Some Like It Hot (1959), and as far as I know nobody else was even considered for the part. Shirley Maclaine had recently won a Best Supporting Actress Oscar for Some Came Running (1958), and she is sublime as Fran Kubelik, the unlucky-in-love elevator operator Baxter has a crush on, tortured by her inability to fall for a decent guy. Maclaine’s Fran is a beautiful mess, raw and confused by a game she is trapped in but can’t figure out the rules. 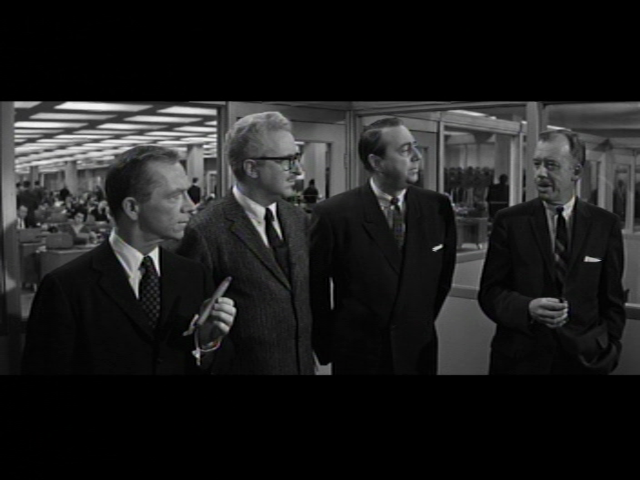 The gaggle of swingers who keep Baxter jumping.

The supporting cast is perfect. A couple of them, the company louses who offer Baxter a chance at corporate success if he just keeps vacating his apartment (and bed) at all hours of the night for their trysts, are a combination of comic elements and plot points, while the tootsies they’re so eager to bed are all comedy. 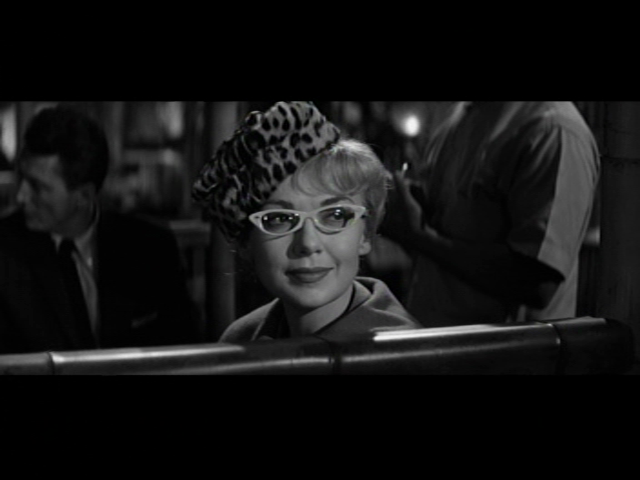 Miss Olsen, Sheldrake’s secretary, who hears things and passes them on…

The only other important female character from the office is Miss Olsen, Sheldrake’s secretary and one of his ex-tootsies, a virtuoso turn by Edie Adams in cat’s-eye frames. Miss Olsen has suffered watching the women who came after her for four years from her front-row seat just outside Sheldrake’s office, and she’s over it. The plot turns on fed-up Miss Olsen’s actions twice, decisively. First, she tells Fran, recently sucked back into Sheldrake’s lies, trying hard to believe he really is going to get divorced this time, the truth about him. Then, when Sheldrake finds out and fires her, she tells his wife what he’s been doing all these years on those many evenings with “the branch manager from [Kansas City, Seattle, fill in the blank],” and Sheldrake finally gets what he so richly deserves: tossed out on his smug, rotten ear. 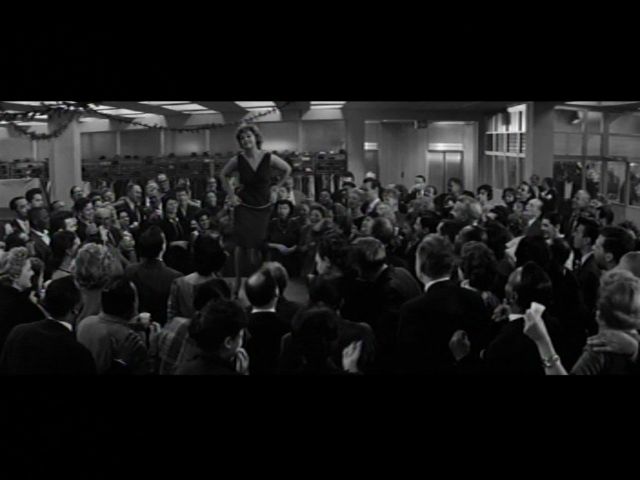 Sylvia dancing on the desk for the tipsy mob at the office Christmas party.

But though they’re less important to the plot, I have a special place in my heart for two other tootsies: Sylvia (Joan Shawlee), a company switchboard operator who’s Mr. Kirkeby’s current playmate, and Mrs. MacDougall, the lonesome jockey’s wife who picks up Baxter at a bar on Christmas Eve, when everything changes.

Irrepressible Sylvia is one of nature’s partiers. When her boyfriend is trying to get her out of the apartment she’s still dancing, a little tipsy, pouring herself another martini. When Mr. Kirkeby asks if they can move their date from Friday to Thursday, Sylvia is appalled: “Thursday! But that’s The Untouchables, with Bob Stack!” At the raucous office Christmas party, who’s doing a quasi-strip tease on one of the desks in Baxter’s old department as the crowd of drunken coworkers cheers? Sylvia. You can see why Mr. Kirkeby is seeing her; she’s all fun all the time. She doesn’t seem bothered by being with a married man, or her lack of prospects for a man she might marry. As long as the drinks are cold and the music’s loud, Sylvia is game. 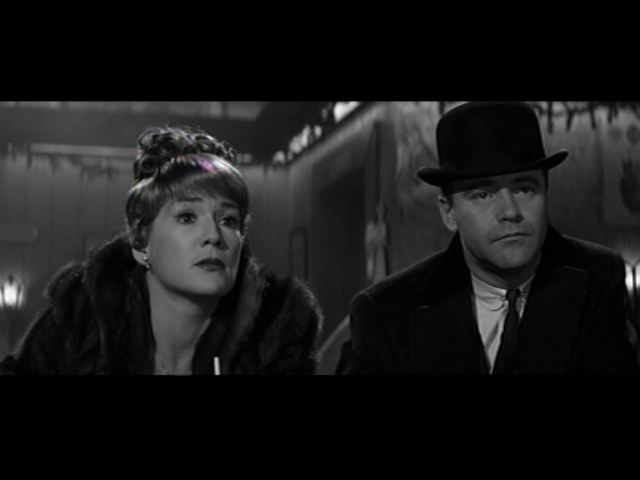 Mrs. MacDougall, Margie to her friends, casts an eye on Baxter, who thought everything was going his way until Miss Kubelik loaned him her cracked mirror…

Mrs. MacDougall is played by Hope Holiday, who I don’t recognize from anything else, but she packs a huge comic punch in her few scenes, mostly from her exquisitely grating voice and gorgeous readings of Wilder’s and I.A.L. Diamond’s very funny dialogue. Margie MacDougall keeps talking about her husband Mickey, the jockey (“He’s so cute, 5’2”, 99 pounds…like a little chihuahua,”), currently locked up in a Havana jail for doping a horse, and how Castro didn’t even answer her letter asking for him to be released for Christmas. She has the bad luck to pin her hopes of a little yuletide ring-a-ding-ding on Baxter, and gets shoved out of the apartment minutes after they arrive. She leaves, but not quietly—screaming that when Mickey gets out, “he’ll push yuh face in, yuh face!” 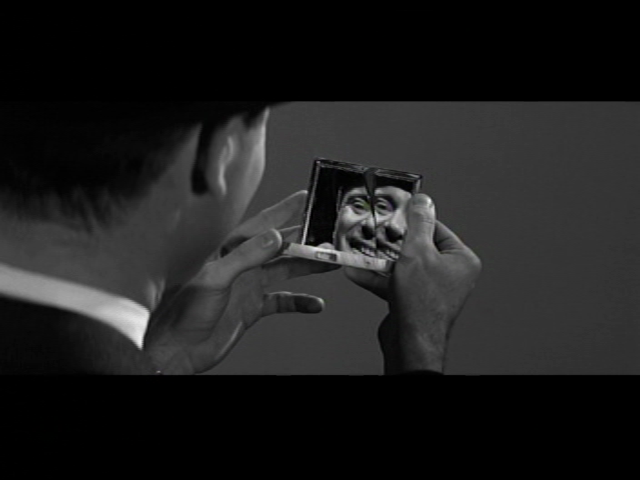 Everything comes crashing down in this one, wordless moment, justly regarded as a stunning bit of screenwriting. 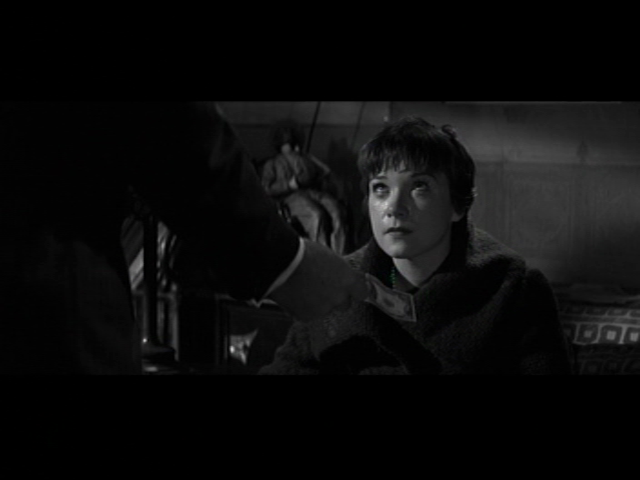 Christmas Eve at the apartment: Fran sees through Sheldrake, no longer able to fool herself about what she means to him.

Just as I’m regretting her exit, Wilder plunges us into the story’s life-or-death events. Baxter and Fran are for the first time thrown together outside the office for a couple of days, and the big shift from painful humor to deadly earnest is smooth as silk. From here until the fabulous ending, the laughs come from some business of Lemmon’s. Nobody else is funny anymore. 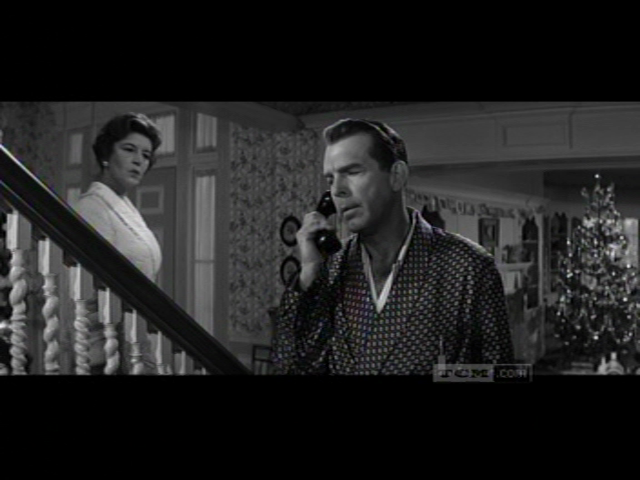 Our single glimpse of Mrs. Sheldrake, Christmas morning, as her husband learns what Fran has done and hides it from his better half.

The critic Hollis Alpert, then writing for the Saturday Evening Post, was puzzled by the tone shifts and considered them marks of Wilder’s failure—to him it was neither fish nor fowl, neither a straightforward comedy or drama, and obviously nobody would do that on purpose. Though it was not even a totally novel thing at the time (see To Be or Not to Be (1942), for a prime example) it was about to become coin of the realm, as movies of the ‘60s and ‘70s deeply explored tonal shifts within a single story. Kinda like life itself. But Crowther and his ilk must have been puzzled by the movie’s success—it was the 8th highest grossing picture of 1960, and it won the Trifecta of Academy Awards: Best Script, Best Director, and Best Picture. 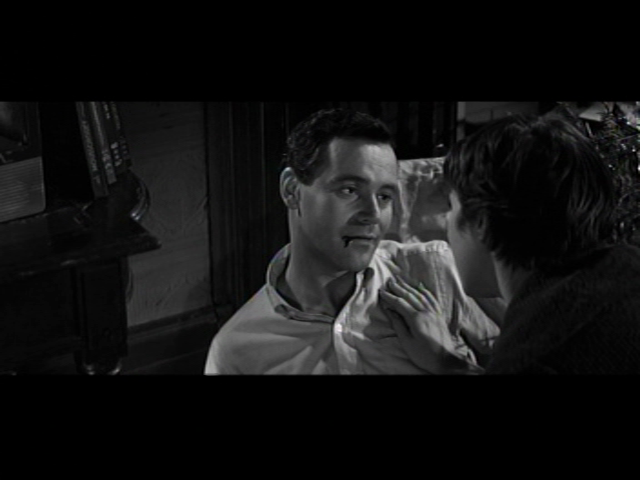 Wilder was also out front with his subject matter and its treatment. The Production Code was weakening, and other directors, such as Otto Preminger, had been doing their best to tear it down, but Wilder did more than his part. From The Apartment’s first few moments, sex and how we behave around it are central, and treated with a frankness rarely seen up to that time outside pre-Code and noir. 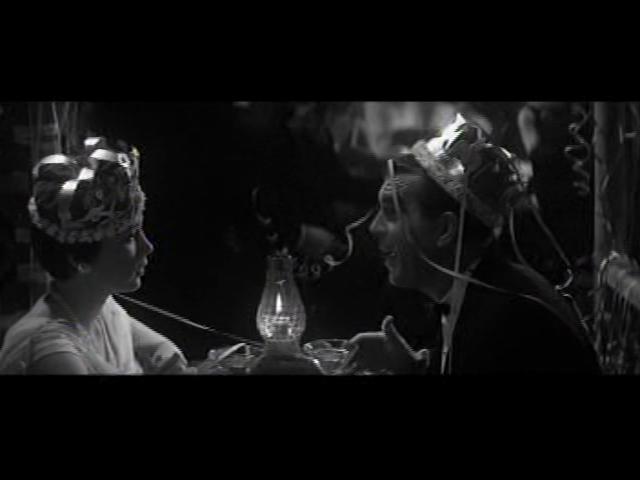 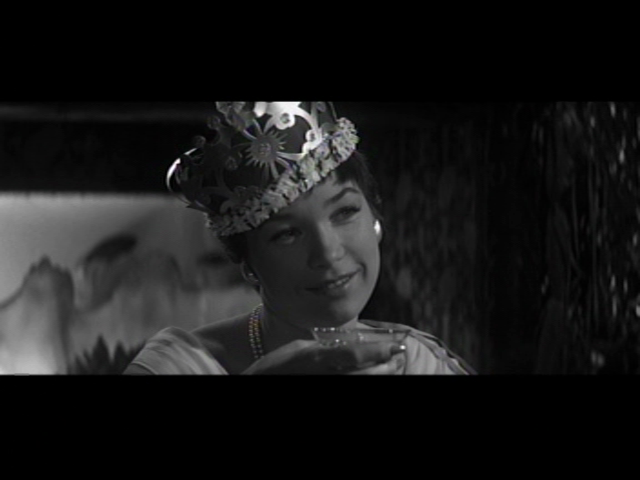 Fran, hearing that Baxter won’t let Sheldrake bring her to the apartment again, and has quit his job, looks happy for the first time in the whole movie. 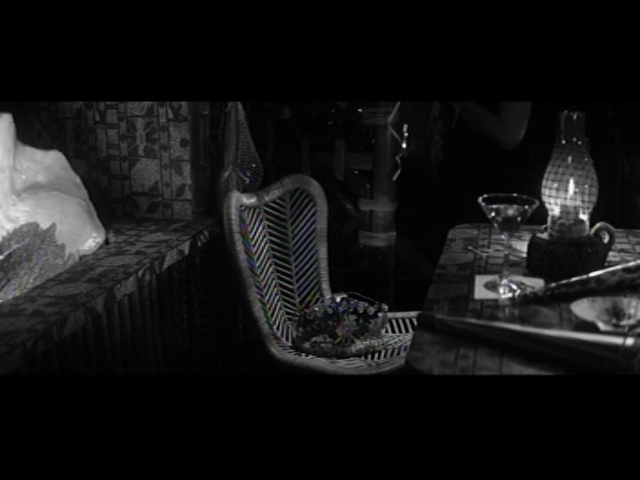 …and just like that she’s gone, and Sheldrake gets to spend New Year’s Eve alone at the NY Athletic Club. Couldn’t happen to a nicer guy. 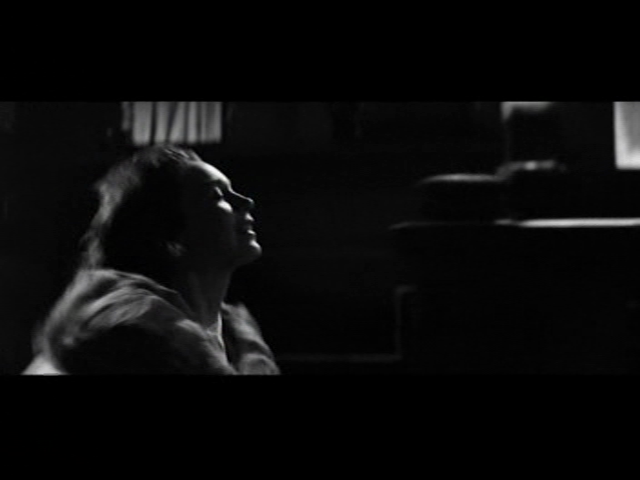 A cathartic moment, when the movie’s romantic musical theme finally has a dramatic moment to match: Fran running away from Sheldrake, to the apartment, to Baxter.

I could go on. Actually, I did: This is a totally different essay than I wrote these past few days, and I didn’t even get to how Baxter and Fran are not exactly twins but definitely soul mates, how they’re both being exploited by Sheldrake and the whole corporate culture, Fran for sex, Baxter for a place to have it, both strung along on false promises, and how finding each other under extraordinary circumstances helps them both escape that trap. 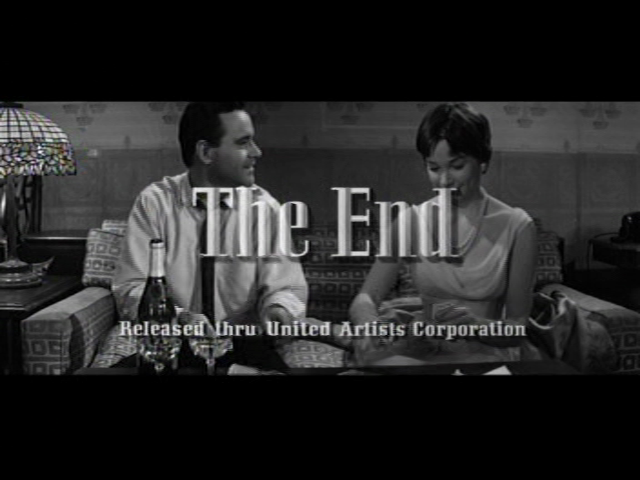 Wilder and Diamond follow one of the greatest last lines in any movie from their last picture, Some Like It Hot, with one as good here: “Shut up and deal.”

The Apartment has big themes like power and corporate exploitation and the abominable treatment of women and human beings dehumanized under all that, but it is great because it is about two sweet misfits who ultimately find their own humanity through each other.

This was written for the Umpteenth Blogathon, hosted by CineMava. Head on over and see the other sparkling entries here. 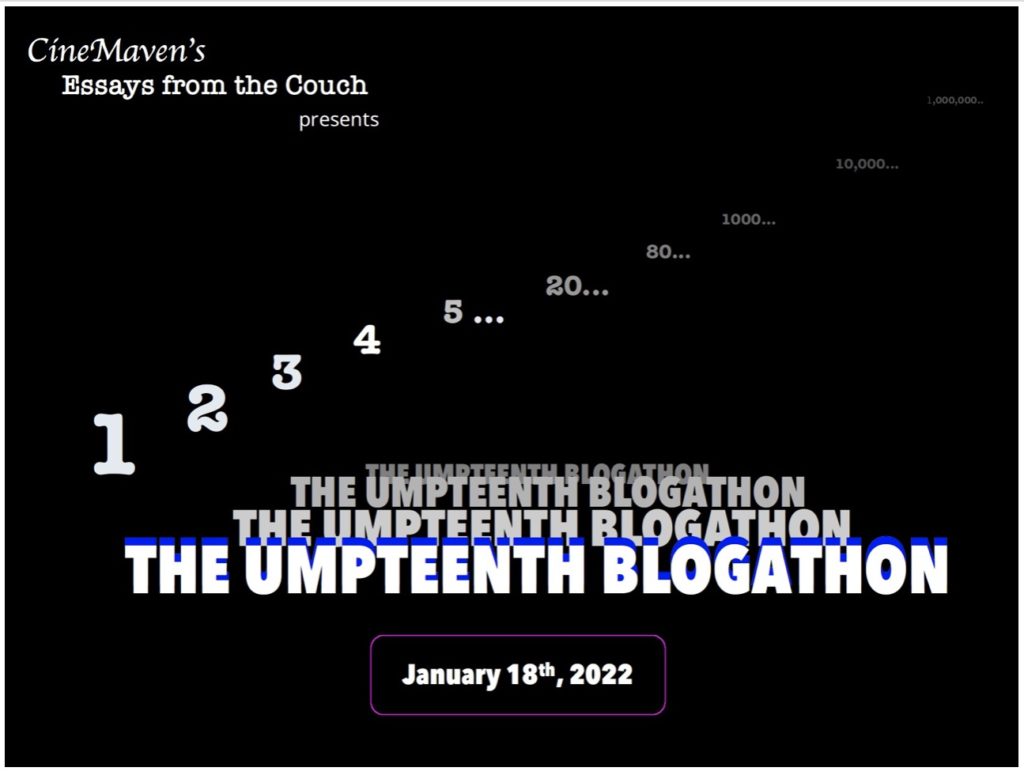