The General (1926): Split-second timing, decades ahead of his time 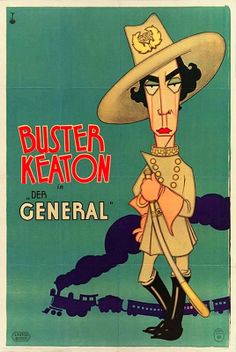 In 1926 Buster Keaton, one of the most successful comedians in Hollywood, released?The General,his eighth feature. It was a masterpiece, now considered by many to be one of the greatest films ever made. But things were different in 1926, and in the wake of the film?s tepid reception Keaton lost his studio, his artistic freedom, his marriage, his house, and his children, and he descended into depression and alcoholism. The man who directed and starred?in some of the most beautiful, hilarious, thrilling comedies ever created would within a few years be out of the directing business forever. He would, however, almost unbelievably, manage a comeback both personally and professionally, with an extremely happy marriage and reconciliation with his now-grown sons and the chance to see his work cheered by crowds all over Europe and the United States. The small man with, as Orson Welles said, one of the most beautiful faces ever photographed, lived to hear audiences gasp, laugh, and cheer the movies that had been thought lost forever, and Keaton?stood by humbly soaking up the adoration of lengthy?standing ovations at major festivals before he succumbed to lung cancer in 1966. That he survived his spectacular fall is astonishing, as amazing as watching him dangle and swing on a waterfall or standing in the midst of a hurricane in the open window of the house wall that falls on him. That audiences 30 to 40 years after his first fame loved him and his work even more than his first fans is as hard to believe as some of the stunts he performed and filmed, without benefit of technology or tricks. But the stunts, the films, and the life?Keaton?s resilience was as remarkable as his imagination and timing.

Keaton?s timing is legendary. The mind-bogglingly intense physical comedy that was his and Harold Lloyd?s stock in trade (often denigrated as ?slapstick,? which sounds crude and sort of dumb) required enormous reserves of nerve, strength, agility, stamina, endurance, balance, and above all an internal sense of timing?that kept them from getting killed.

But in a larger sense Keaton?s timing was terrible. Or maybe that?s not quite it. Perhaps he was just outside of time, and he had to wait for us to come along and appreciate him. Don?t let the Great Film designation scare you off?The General.?Although Keaton was taken up by intellectuals during his comeback, he never considered himself an artist but rather a professional who loved to work and, as he said, ?thought, ate, and slept making pictures.? It?s safe to say the last thing he was thinking about when he made?The General?was ascending into the pantheon. Keaton was an unpretentious man, completely lacking formal education (well, they sent him to school once, but he didn?t even last a day). But he wasn?t a primitive, either, though that was one of many ridiculous assumptions people made about him through the years.?The General?is not only visually gorgeous, it?s stunningly evocative of its Civil War setting, and that?s because Keaton and his staff researched the particulars scrupulously, every detail from architecture to costumes and hairstyles to weaponry. Mathew Brady?s Civil War photographs anchored the production design. Keaton was proud of that, the film?s fidelity and accuracy to its period. Sometimes, when researching this piece, I had to look closely to figure out whether a photo was Brady?s or Keaton?s.

The original reviews weren?t all bad, but there weren?t many raves. It?s so hard to understand, 89 years later, what didn?t work for them. For example, Robert E. Sherwood, not yet a successful playwright and screenwriter, was reviewing movies for Life (then a humor magazine). He was a friend of Keaton?s, and yet he found?The General?lacking. Sherwood thought the movie in bad taste, particularly a scene in which Johnnie accidentally kills a sniper who has been, one by one, knocking off the men Johnnie is fighting next to. Sherwood thought death unfit subject matter for a comedy. Some critics said that the movie wasn?t funny enough, there weren?t enough gags. Others complained that the story wasn?t interesting and thought the film dragged.

Were they looking at the same movie I have been watching? How can we account for their so missing the mark on a movie that is not just hilarious but thrilling, grand, and romantic? This is a comedy with epic sweep. Apparently in his own time Keaton was discussed only in terms of boffo laffs. ?You?ll split your sides!? and so forth. Chaplin had obvious dramatic qualities and a sense of the tragic, but nobody saw those things in Keaton. Perhaps it was because while Chaplin courted the audience?s sympathy, Keaton never did. As far as I?m concerned, he has my heart?he doesn?t have to ask. But then one of the qualities that has made Keaton age better than other silent comedians (including Chaplin, though his greatness as well as?Harold Lloyd?s is never in question) is Keaton?s reticence, his restraint, his underplaying.

That underplaying was misread until rather recently. People were really thrown off by Keaton?s not smiling. God only knows the source of that idiotic nickname ?The Great Stoneface,? but it still turns up once in a while. Generally people figured that if he wasn?t smiling, mugging, ?indicating,? that he was devoid of feeling, blank. Richard Schickel wrote as much in 1962, and Walter Kerr, in his book?The Silent Clowns,?wrote that Keaton demands nothing from us emotionally.

Really? Keaton is?never?blank! We can?t always say exactly what he?s feeling (which was true of him in real life as well), but those huge, heavy-lidded eyes are extraordinarily expressive, and the relative calm of his other features just gives the eyes more play. Once you stop looking for big expressions, grins and grimaces, and get used to the quiet of his beautiful face, you start to see the feelings moving across it rapidly, like clouds in a windy sky. Keaton?s cannon in The General Keaton was one of the actors who first discovered that less is more in screen acting. There were others, like Garbo, but it?s especially striking in a comedian. We expect comedians to be selling, and Keaton never did. Keaton let us come to him, which plays well in an era in which being ingratiating often reads as neediness. And if there?s anything we can?t stand, it?s neediness.

Also, Keaton?s relatively placid face is a perfect counterbalance to his fabulously kinetic body, so often powerfully in motion. Watching Keaton run is one of life?s great pleasures. I like to think that Keaton, Astaire, and a few others had a privileged relationship to the physical world. Like the greatest athletes Keaton?seems to be able to slow time so that he can do something we know is impossible, that had to be done at precisely the right instant or at best the gag wouldn?t come off and at worst it might leave him?maimed or dead.

So??The General?had not enough gags or the gags were unfunny, and thus was thought by some to fail as a comedy. Clearly Keaton had breached the boundaries of what a comedy was supposed to be (a comic historical epic), and I think critics and perhaps audiences just didn?t know how to make sense of that. In postmodern times we?re used to slice-and-dice genres, so that doesn?t seem jarring anymore. There have always been multigenre works, and some of them have been well received, but for some reason audiences get particular ideas set in their minds about particular artists (see my Peter Lorre post) and then instead of marveling at the artist?s range they get anxious and dismissive and cram the artist back into the box. Keaton with The General So I?m not going to give you a plot synopsis or describe my favorite gags or talk about Keaton and his love interest? You can find all that in a hundred places online. I?m just going to say that if you haven?t seen it and you appreciate comic invention and romance and beauty, this is a film you may love. I know that people think of Great Movies the same way they do Great Books?things they are?supposed?to revere?and nothing bursts the balloon of comedy faster than the dead weight of intellectual legitimacy.

If you have seen it but not recently, next time there?s a storm forecast this might be the movie to watch. Like all great works of art (sorry, Buster, but it?is?art, though I know that wasn?t your intention) The General does not grow stale, and each time you see it you will notice things that had either passed you or that you have forgotten. Between the thrills of the chases are small, memorable moments: Johnnie Grey rejected by the draft board and then by his girl; Johnnie and his beloved, Annabelle Lee, leaning against each other, sleeping half upright on the ground; Buster in his new uniform, still and serious but radiating pride and a sense of accomplishment and delight?