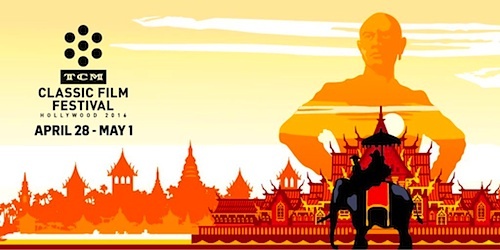 Greetings, gentle reader! After another refreshing 5 hours of sleep I?m off to the day?s delights and trials, of which more in a moment.

Here?s what happened yesterday: I hot-footed it down to breakfast at Club TCM, where I got to shake Leonard Maltin?s hand, miss winning a first-class vacation for four on Delta in the raffle by three numbers (owwie!), and inform some newbies that they had to show up more than an hour early for screenings to get a number (?What number??, they said).

Then saw the restored and stunning Shanghai Express at 9:15, introduced by the director?s son:

I managed to lose my cherished little Japanese fan, which I am never witihout, in the dash from the theater, just as I did another one four years ago at the Egyptian.

Then I met my friend Mike over at the Roosevelt lobby for Illeana Douglas?s book signing, and we got a photo with her. She was lovely and so gracious.

Then at 12:30 we dashed back across the street to get numbers for the 2:15 screening of The Conversation, with Coppola discussing before. It was one of those prime festival experiences, sitting in the new, comfortable seats at the Chinese (maybe my favorite theater), listening to the director talk of many things:

Just being back in The Chinese, one of the most beautiful movie palaces I have ever seen, felt like a homecoming, and the interview was fascinating. The film was as good or better than it was on original release, inspired by Blow-Up (now that would be a double feature!) but incorporating what was then revolutionary surveillance technology. The script is extraordinary, the whole cast was fantastic, but Hackman?s performance was a personal best, a tour de force.

After that we trudged up Orange Avenue to our lodgings to reboot and to charge all our devices. Then just before 6 we hot-footed it to The Egyptian to wait for our numbers to see The Passion of Joan of Arc, with Voices of Light, an oratorio by Richard Einhorn that is a response to the film, which is taken from the actual court transcript of Joan?s trial in the 15th century. We got numbers and ran around the corner to Sadie?s Kitchen, a quiet hideaway with excellent food and drink. It was happy hour, so we had a tasty beverage and some flatbreads to fuel us through the screening.

They don?t allow any photography, still or video, at The Egyptian, so I can?t bring you any of Leonard Maltin?s conversation with the composer, David Einhorn. The air was electric, though?you could sense that this was going to be one of?those?events, the ones you?ll be talking about for years to come.

I had never before seen the movie though I know it by reputation, of course. I had the Kleenex ready, and boy did I need them. I will come back later and discuss the film and the oratorio. Suffice to say that it was a stunning experience, I soaked through a ton of tissues, and that it was unforgettable. For the rest of the night I kept suddenly remembering a moment, a shot, the horror and the pity of the film.

So now a very quick bath and off to The ?Egyptian to get a number for Ron Hutchinson?s Vitaphone at 90 presentation at 9am. This one will also be a barn-burner, a really hot ticket and an amazing event.

The other big ones for today are the Elliott Gouuld interview at 4 and Anna Karina (squeeee!) introducing Band of Outsiders at 9:30. There are eight events I would kill to see today, but the logistics of the festival prevent that, as does my stamina and my avility to be in two places at once.

Oh, nice celebrity encounter: James Cromwell was right next to my line at Joan of Arc. I spoke to him briefly (he was very friendly and gracious) and snapped a photo of him, which I will post later.

All right, time to carpe the damned diem.