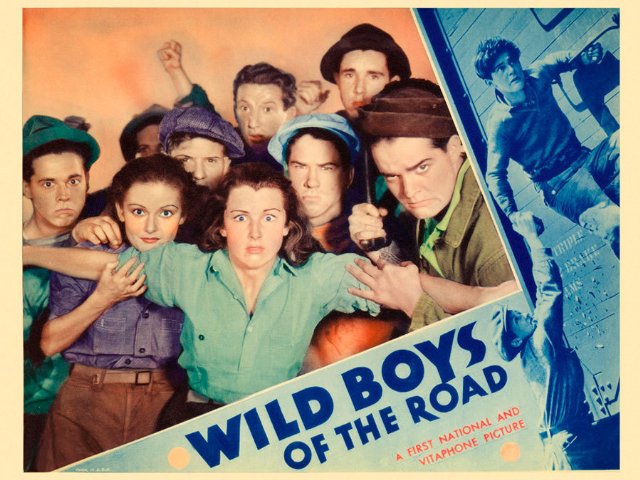 Wild Boys of the Road?is one of the movies I read about 40 years ago in?We?re in the Money,?by Andrew Bergman?the first book about Depression movies I ever saw.

The story is one of those Warner Bros. ?ripped from the headlines? affairs?among the many horrors of the era were the kids who left home and rode the rails looking for jobs but mostly finding nothing but danger and deprivation. Apparently there was a Russian film,?The Road of Life,?about the same problem. Director William Wellman brought a keen sympathy to this film, and that?s the quality that most defines my favorite of his films. Wellman?s own life before becoming one of Hollywood?s most prominent directors was a real-life adventure: he had been a hockey player and worked a variety of jobs that gave him a broad experience as a very young man, before falling in love with flying and, like other similarly inclined American fellows, gone to France and joined the French Foreign Legion as a point of entry to the Lafayette Escadrille. Wellman did fly in the war and was wounded badly enough to have a metal plate in his head and various injuries that caused him severe pain for the rest of his life. His experiences both as a flier and bonding with comrades during the war were among the most profound of his life and he drew upon them in many of his films.

Wellman a great director for us to discuss because of how the disappearance of his pre-Code work for 50 years has shaped his appraisal as a director. He started working in film in 1919, won the first Academy Award for Best Picture in 1927 (for?Wings,?the first war movie about the role of flight in battle), and over the next 46 years made 76 films. In his own time Wellman was considered one of the greats, but his reputation has suffered under the influence of the auteurist critics who saw him (as they do William Wyler and George Stevens) as a studio hack. Andrew Sarris and David Thomson think that Wellman had no point of view as an artist, no consistent artistic presence as a filmmaker, while Wellman biographer Frank Thompson disagrees, seeing in Wellman?s catalogue recurring themes and a distinct sensibility. There are certainly some forgettable movies among those 76, and, as Garry Giddins points out, Wellman?s reputation might have been better had he made only a dozen films because people wouldn?t have been so distracted by the lesser ones. The third problem in appraising Wellman afflicts many directors from the past?we tend to remember their last films, the ones we saw most recently. And as is often the case with directors, Wellman?s late works were not among his best. Wellman?s pre-Codes, though, are another matter. Like other directors at First National (which would become Warner Bros./First National and then just Warner Bros.) Wellman worked at an incredible pace, completing 20 films between 1930 and 1933. Several of these (Safe in Hell,?which we watched in pre-Code I,?Heroes for Sale,?and today?s film) are among the most vital, artful, and emotionally intense movies of the era. In addition, Wellman?s 1931 entry to the gangster cycle,?The Public Enemy,which surprisingly continued to appear through the decades these other films were languishing, is one of the troika of the best-known and highly regarded pictures of the genre, along with?Little Caesar?and?Scarface. Wild Boys of the Road?could not be made after strict Code enforcement because of its portrayal of a rapist brakeman on the railroad, and Sally?s aunt the prostitute would have had to become a dancer or hostess or something Code-sanctioned. Also, the overall tone of the film, saturated with the pre-New-Deal despair of those desperate early Depression years (at the time people referred to Hoover?s lack of leadership as his ?raw deal?), shows a lack of faith in the ability of institutions and government to address the economic crisis that was eroding not just economic order but the stability of families. Imagine a movie made two years later in which an army of vagrant kids take on a police force and win, or more shocking, in which they avenge the rape of one of their own by killing the rapist, again with no consequences. It?s unthinkable. Wild Boys star Frankie Darro is a favorite of mine, a marvelous actor who had a rare quality, at once bitter and brittle and tender. He was born into show business and ?started his film career as a toddler. Darro?s parents were acrobats, and in this movie and another feature also made in 1933,?The Mayor of Hell,?which we screened in Part I of this course, he gets to showcase his acrobatic skills. Darro had not only the talent but that undefinable something that makes the difference between a good actor and a big star, but he was so slight himself that after he was too old to play juveniles the good parts dried up and he spent a lot of time playing jockeys and other little guys, often in Poverty Row westerns. Darro became an alcoholic and died broke but, according to his biographer, still game. Dorothy Coonan, who plays Sally, was a 19-year-old Busby Berkeley dancer when Wellman saw her and in a most un-Wellman-like way fell in love with her instantly. He was still married to his third wife, though the marriage was failing, and Coonan refused to go out with him until he was divorced. Wellman wanted to cast her in Wild Boys? Dorothy wasn?t interested?she liked dancing and?had no desire to act, but ?Wellman pleaded with her. ?Look, I?ve looked at all the girls that they?ve got,? he said, ?and I couldn?t find the girl I wanted.? William Wellman with Dorothy Coonan on the set of Wild Boys of the Road.

The girl he needed for the role had to have ?Beauty and boyishness?an athletic something and?a softness about her. A tough thing to get.? ?You?ve got it,? Wellman told Dottie. ?You?re not so pretty as these other girls, but you?re prettier to me.? She finally agreed, and Warner Bros.? publicity department swung into action: They took out a $100,000 insurance policy on her freckles (and planted a story about it in the papers). We get to see her dance in a brief scene. Coonan and Wellman married, she retired and had seven kids, and they stayed together until he passed away in 1975.

James Wingate wrote to Warner Brothers after reading the script to express concern for 1) the scene of the brothel, suggesting that it be changed to a speakeasy or something that will not be so clearly censorable 2) the rape on the boxcar, suggesting that it be less brutal; that we not see her clothes torn; and that the dialogue of the boys when they come back be cut 3) that law enforcement be treated as less brutal and more sympathetic.

Wingate wrote Warners to say how much he liked the film and that he felt that they had dealt with challenging material in a good way, though he could not of course guarantee that individual censors would not want cuts.

Then a letter from A.F. Whitney, President of the Grand Lodge Brotherhood of Railroad Trainmen in Cleveland, Ohio:

My dear Mr. Hays [this is on letterhead]:

My attention has been called to objections raised by many railroad boys in California to the motion picture, Wild Boys of the Road.

I have not seen this picture but my information is that is strongly suggests the idea that railroad men are brutal and immoral. For your information I am enclosing herewith a photostat of a clipping taken from a Sacramento newspaper.

I am confident it is not the desire of your industry to do any individual or class of individuals an intentional wrong and I will greatly appreciate it if you will give this matter your thoughtful consideration and do whatever may be possible to remove the offensive portions of this film.

Since many members of this organization have object to this picture, I shall appreciate being advised of the action you may decide to take in the matter in order that I may inform our members who have objected.

Massachusetts (Sunday showings only, of course):

New York: Reel 4: Shorten scene where boys throw eggs at railroad police, routing them, by one half

Reel 6: Eliminate spoken subtitles in dialogue: The first cop that comes in here, we?ll mob him?

?Go get your ammunition ready?

OHIO: Cut a ?lot of the dialogue in the rape scene, the lead-up to the rape and the aftermath (murdering the rapist).

PENNSYLVANIA: Cut some of the early scenes of necking in the car, and pretty much the entire rape scene.

British Columbia: Inserted a long prologue?not sure who wrote it [from Warner Brothers? or who?]

AUSTRALIA: Cuts the rape scene, and reduces much of the operation scene in Reel 5, especially registering pain.

Note: Today?s feature is short enough to give us time to watch another feature. We?ll see either?Three on a Match?(1933) or?Employees Entrance?(1933).