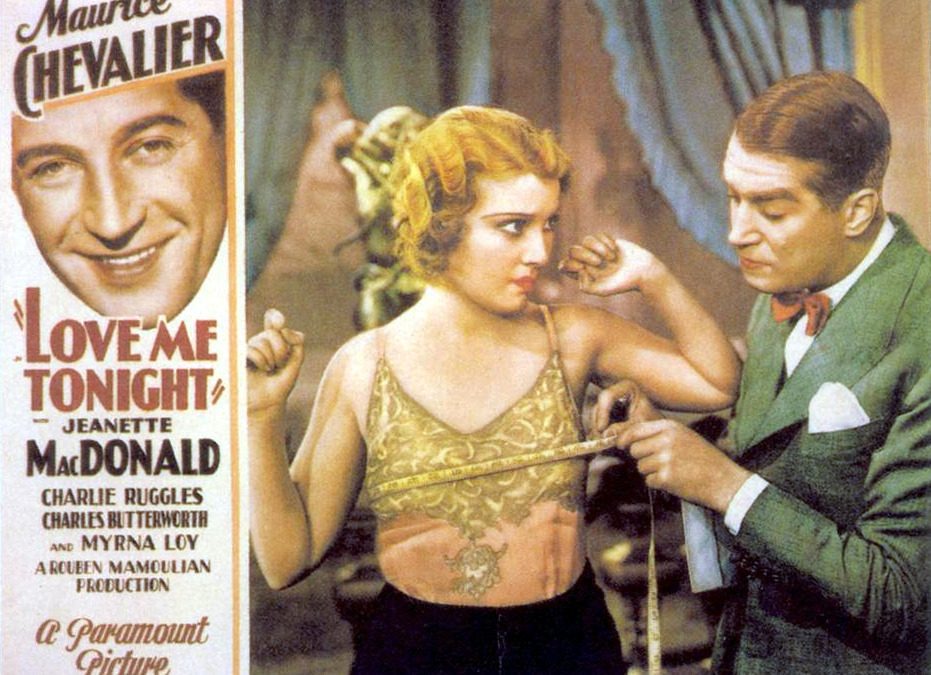 ?If you were to see?Love Me Tonight,? Mamoulian said in an interview in 1970, ?although it is a very light, gay musical, you?d see in it most clearly what motivates me, what I like. The whole of?Love Me Tonight?is a poem, from beginning to end. Everything is rhythm, counterpoint, stylization?? ?[T]he style of the movie, its subtlety and inventiveness, its gentle parody of other films in the genre, its ?ineffable mixture of absurdity and enchantment,? are Mamoulian?s own. David Robinson wrote that in this film, ?which is for me still the most enchanting of all musical films, ? [Mamoulian] used sound metaphorically.

?For instance, when a trio of awful old ladies are gossiping excitedly, the noise that comes from their mouths is the yapping of little dogs. And when Jeanette McDonald, in a moment of extreme embarrassment, drops a vase, the impact with the floor is a dynamite explosion.? ?Mamoulian entry in?World Film Directors Volume One: 1890-1945

The year 1939 gets a lot of ink as Hollywood?s greatest year, but so far in this course we?ve seen four lesser-known films that are as good as anything produced in 1939, all of them produced in 1932. Today?s film,?Love Me Tonight,?was directed by Rouben Mamoulian a few months after he completed last week?s feature,?Dr. Jekyll and Mr. Hyde. It?s an impressive leap from the murky, nocturnal atmosphere of Dr. Jekyll?s London to the airy, lighthearted?Love Me Tonight?the bright sunshine of Maurice the tailor?s workaday Paris and the spacious chateau and countryside?and it highlights the director?s stylistic range and fluency.

Love Me Tonight?has quite a pedigree: a cast headlined by Maurice Chevalier and Jeanette McDonald, both huge stars after appearing in several musicals for Ernst Lubitsch; a supporting cast that includes C. Aubrey Smith and Charlie Ruggles (both of whom we saw two weeks ago in?Trouble in Paradise), comedian Charles Butterworth (who was featured in?Beauty and the Boss), veteran character actress Elizabeth Paterson, and Myrna Loy as a frustrated aristocrat with a nymphomaniacal bent, along with a cadre of veteran characters including George Gabby Hayes(!) in bit parts; a sparkling script by Waldemar Young, George Marion Jr., along with Samuel Hoffenstein, who cowrote?Dr. Jekyll...; and it has a delightful score by the fast-rising songwriting team of Richard Rodgers and Lorenz Hart. Mamoulian would go on to collaborate with Rodgers and his second partner, Oscar Hammerstein II, on the first Broadway productions of both?Oklahoma!?and?Carousel. The movie opens with a ?symphony of sound,? an idea Mamoulian borrowed from himself?he had first used it onstage in?Porgy?on Broadway in 1927. Here he creates the joyous clatter of a Parisian morning, starting in silence just after dawn and adding one sound at a time, building a counterpoint of rhythms and sounds that together create the raucous soundtrack of city life. At its end the camera enters a window. On a wall we see a straw hat, below it a few spare lines that form the silhouette of a man?s body in profile, and not just any man: Our first sight of Maurice

It is the unmistakable image of Chevalier, whose head we see burrowing through a turtleneck as he dresses to go to work.

In the quote above Mamoulian speaks of ?rhythm, counterpoint, stylization,? and it?s worked so elegantly that it?s easy to miss a lot of it as the scenes float or careen by.

So here are several sequences to watch for:
?Isn?t It Romantic???The first big song in the movie is first sung by Maurice in his Parisian tailor shop and is then carried along by one character after another, each having heard it from the last, from the city to the country and finally to the Princess?s balcony in the giant gothic chateau where she languishes in a tower. ?Isn?t It Romantic??: The composer passes the song to the soldiers

The sequence works on several levels, the most obvious that it connects Maurice?s bustling Paris with the Princess?s arid palace, where she pines for a lover to free her from her metaphorical fairytale enchantment.

The hunt?Mamoulian plays with film speed to create an animal ballet: the buck springs along like a cartoon while the hounds, horses, and hunters race to catch him. The buck reaches Maurice, who offers him protection, and the hunters depart in slow motion.

?The Son-of-a-Gun Is Nothing But a Tailor??When Maurice reveals to the Princess that he is not a Baron but is only himself, an excellent tailor, she reacts with horror, as do all the palace?s occupants, upstairs and downstairs. The butlers and footmen scatter in an overhead shot that makes them look like pool balls breaking on the table, paintings are so outraged that they fall from the wall and talk.

The Princess races to stop the train carrying Maurice away

We will look at some memos regarding concerns of the the PCA, as well as some of the records on what individual state and Canadian provinces removed when showing the film.?Love Me Tonight,?in contrast with?Trouble in Paradise?and?Dr. Jekyll??was not fundamentally alarming to the censors. Most of them objected to the lyrics of one song, to a scene where Myrna Loy speaks of showing the chateau?s visitors the virgin springs, to a brief scene in which Miss Loy is shown wearing a rather sexy lounging outfit. Isolated censors raised other objections and cut their prints accordingly.