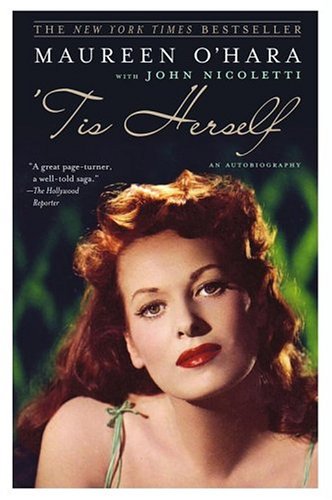 I thought some commentary from herself discussing?her experiences shooting several of the movies in the TCM lineup would be add dimension to this day of Maureen. So here?are some excerpts from Miss O?Hara?s memoir,??Tis Herself,?which is a fantastic read, written very much in her own voice.

Just before we began shooting, Laughton sent for me. He greeted me in typical Laughton fashion, with a compliment: ?Maureen, you?re going to be just marvelous in this picture.? I thanked him and watched the smile fade from his face as he continued. ?But your name is too long for the marquee and we have to change it.? with Robert Newton in her breakthrough movie (her second),?Jamaica Inn?(1939)

?My jaw dropped open and I could barely sputter a response. ?But?but I don?t want to change my name.? My protest fell on deaf ears. ?Well, I?m sorry, but you have to. You can either be Maureen O?Mara or Maureen O?Hara. Which do you prefer?? I tried to hold my ground. ?Neither. I?m Maureen FitzSimons.? Laughton dismissed my protest and made the decision for me. ?Then you?re Maureen O?Hara,? and so I was and so I am. With this last hurdle crossed, Laughton felt I was ready to meet the film?s director.

I first met Alfred Hitchcock at a preproduction meeting with Laughton and Pommer at Mayflower Pictures. Since it was Laughton who had cast me in the role, I wasn?t sure how Hitchcock felt about me. He was already a top director at this time, and I was an unproven film actress.

Hitchcock put any worries I had for myself to rest right away. We liked each other from the start. I never experienced the strange feeling of detachment with Hitchcock that many other actors claimed to have felt while working with him. I know some of his leading ladies have said that he treated them with devotion one minute and then turned cruel the next, but it never happened with me.

The honest truth is that Hitchcock never wanted to make?Jamaica Inn?to begin with. He wanted to go to Hollywood and begin his film career in America. He hated period pieces and thought the costumes actors wore pulled audiences out of the story. He only agreed to direct the picture because he hoped it would assure him of the chance to direct the film adaptation of?Rebecca, which had also been written by [Daphne] du Maurier. His gamble paid off, of course, and?Rebecca?was later a huge success for him.

That?s not to say there weren?t things about?Jamaica Inn?that Hitchcock became excited about.?He loved the Jekyll-Hyde duality of Laughton?s character and he had a lot of fun with the shipwrecking sequences. In fact, he was absolutely giddy about luring unsuspecting ships into the rocks by having the smugglers use fake lights. While shooting those sequences, I could see the devilish boy hiding within his gigantic frame.

His physical appearance was very much a part of his eccentricity. He was always very neat and tidy in his appearance, but he moved very awkwardly because of his weight. He rarely socialized on the set and usually spoke in a low Cockney whisper to keep the set quiet. I thought it was very odd watching him sit patiently in his director?s chair, remaining absolutely silent for hours. No one dared break the mood he had set?no one, that is, except Laughton.

Jamaica Inn?was the first artistic collaboration between Laughton and Hitchcock. Both men were powerful forces on the set, with huge egos, and this made for some very exciting and tense moments. Laughton was not only the star of the film, but also its coproducer, which gave him a lot of latitude.?They had very different filmmaking styles. Hitchcock wanted a subtle and delicate approach to the story, while Laughton wanted it grandiose and larger than life.?Laughton frustrated Hitchcock, and it is very evident when you watch the film that it is far more Laughton?s than Hitchcock?s.

*Jamaica Inn?screens at 6am ET.

On shooting her first stunts, in?Hunchback of Notre Dame*?(1939):

After weeks of shooting, I was finally sent to work with two of the greatest Hollywood stuntmen, Sailor Vincent and Dick Crockett, in preparation for the stunts I had to perform in the film. These were the very first dangerous stunts?but certainly not the last?that I was asked to perform. I had no prior stunt training, and we prepared for many days before shooting them. At eighteen, I was fearless and willing to do anything required for the role.?Looking back with wiser eyes, I realize that I was crazy and what I did scares the hell out of me today.?My first stunt was the least difficult. As Esmerelda waits on the platform for the hangman to put the noose around her neck, Quasimodo swings down from the cathedral scaffold on a rope, scoops her up in his arms, and then carries her back up to safety, a triumphant rescue. Sailor Vincent performed this stunt for Laughton, and he instructed me to hold on tightly to the rope with both hands while he held me with one arm around my sternum. This was real life. There were no harnesses or safety nets used. If we had missed our mark, we would have crashed into the wooden scaffold and fallen forty feet, to the stone floor below. Fortunately, we got it on one take. ?The second stunt was the more dangerous of the two; in fact, it was truly life-threatening. We filmed that one the following day. It was Dick Crockett, standing in for Laughton, who raised me up over his head on the cathedral balcony and showed Esmerelda to the cheering crowd below after she had been saved. The stunt had three parts: raising me over his head, holding me there for a period of time, and then getting me safely back down. Again, no safety devices of any kind were used, not even a railing or a board to break my fall should Crockett slip. Had Dick?s elbow bent or my weight shifted, I would have fallen hundreds of feet down to the stone steps and been killed instantly.?I had a lot of nervous energy before he lifted me up, but I forced myself to smother it. Once he got me up over his head, I kept my body rigid, in a lifeless position, and purged all thoughts of fear from my mind. Fear and panic are killers.

I felt a tremendous adrenaline rush when it was over, which was followed by a great sense of gratitude to Dick Crockett. This began my love affair with stunts and stuntmen.?The bond of trust that forms between you is very special, and that?s why most performers prefer to use the same stuntmen in picture after picture.

If I had to continue making pictures that cast me as part of the scenery, I would find a way to break out of the background. I would force myself to the foreground of every scene I was in.?Within the confines of those vehicles, I resolved to be such a dominant presence on the screen that I couldn?t be ignored.

How I accomplished this feat goes right to the heart or why I became a swashbuckler.?I not only brought out the internal strengths of my characters more, I brought out their physical strengths as well. This combination, ultimately, became my trademark: Maureen O?Hara?the fiery, feisty redhead. At Sword?s Point (1952): Maureen swings her sword with the best of them

One of the first things I did was make it clear on the set that my characters had to be part of the action.?They had to let me do all my own stunts and allow me to hold my own on-screen against the men. I had to be able to be their equal as a woman.It was the only way I could deliver a stand-out performance. They reluctantly agreed, and I began to tap into the tomboy who still lived within me?. I found and refined the little girl who had dragged the Lombard boy out to sea at Bray. I found the athlete who loved soccer, boxing, camogie, and fencing in school, and I brought parts of both to the screen. One of the first films to showcase the new Maureen O?Hara was RKO?s swashbuckler?At Sword?s Point.

The plot of the movie is a little hard to swallow, but it was fun as hell.??One for all and all for one,? only this time, it?s the sons of the original Musketeers who ride to the rescue, with just one exception. I play Claire, the daughter of Athos, who wields as fine a sword as her father did before her. Former fencing champion Cornel Wilde was cast as my leading man, in the role of D?Artagnan. Cornel was a good actor and a great swashbuckler, as good as Ty Power or Errol Flynn.

I trained rigorously for six weeks with Fred Cavens and his son to perfect my stunt sequences for the picture. Fred Cavens was an outstanding Belgian military fencing master and had trained all the great swashbucklers in Hollywood. He taught me intricate attacks and parries, envelopments, engagements, and coupes. Physically, I?ve never worked harder for a role. My efforts won me the admiration and affection of the stuntmen, but drew only sneers from the film?s director, Lewis Allen. He said it was a joke that the studio was letting a woman fence. I was livid and determined to make him eat his words. Fred Cavens and the stuntmen, who now considered me *their* girl, and one of them, all came to me and said,??By God, when you do your first fencing scene, fence the bleedin? hell out of it. Just go at it. We?ll watch out for you. Make that son of a bitch look like a horse?s ass so he?ll eat his words.?

In the [first] sequence, I?m in a horse-driven coach coming around a corner and have to jump out and start fencing with several guards of the rebellion.

When Lewis called ?Action,? and that coach rounded the corner, I leaped out and started fencing like a son of a bitch. I lunged and attacked, I parried and counterparried with first this stuntman and then that one. I rotated my foil with such finesse it was as if I were holding a bird in my hand.?I killed this one, disarmed that one, and each of my opponents fell one at a time. When it was over and Lewis finally yelled ?Cut,? the stuntmen all burst into applause. Lewis was sitting in his chair, dumbfounded, with his mouth wide open, as I strolled past him to my chair.?I knew than that I had tapped into something very powerful. Hollywood snobs might have sneered at these pictures, but audiences never did. They loved them.?The studios sure made a lot of money off their stuntgirl.

?So spend the day with herself: Watch the films, read these excerpts, and order the book: Get it at Amazon