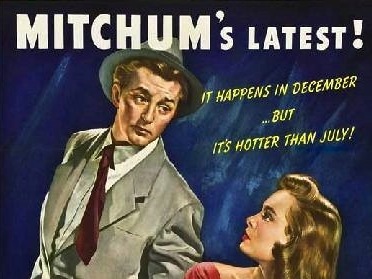 An unassuming postwar holiday romance set in New York City, the first clue that?Holiday Affair?broke the Jell-O mold of its genre comes via its leads, wholesome but definitely sexy?Janet Leigh?and sexy but definitely unwholesome?Robert Mitchum. Maureen O?Hara is of course a hottie of the first order, but in?Miracle on 34th Street?there isn?t enough heat between her and John Payne to warm an ant farm.

Holiday Affair?manages to balance family values and healthy libido in a way seldom seen in Hollywood movies from this era, when the Code still sentenced married couples to single beds and insisted, straight-faced, that nice people didn?t have sex until and unless they were married. In one single kiss Mitchum blasts through that barrier with sheer ardor. Leigh is doing the dishes, her back to the camera. Mitchum comes up behind her, taps her lightly, and before she can speak he sweeps her into a kiss of such intensity?not a normal movie kiss, stiff-bodied and statue-still, but laying himself bare and reaching past her reserve and hesitation to the vibrant sexuality she?s so busy denying.

Here?s how that smokin? kiss made its way into a harmless little romance (and I heard it from Ben Mankiewicz, so it must be true): When Mitchum tapped Leigh she was expecting the rehearsal kiss, the acted kiss, but Mitchum gave her ?the full Mitchum treatment.? And boy, does it show, both while it?s happening and in her expression after it ends?shock, uncertainty, excitement.

Holiday Affair? is explicitly about the possibility of sexual reawakening?after the trauma of loss. Connie Ennis (Leigh) is a war widow raising a little boy in Manhattan (she gives their address as 165 E 75th Street?a nice detail, because usually New York addresses in the movies don?t exist?I?m pretty sure the Ricardos lived in the middle of the East River). Connie and her late husband, Guy, were crazy about each other, and Guy?s mother talks fondly about Connie?s habit of buying him loud ties, saying, ?This is a symbol of our wild and fiery love? (plot point).

Connie is lively and attractive, but the trauma of losing Guy has left her stuck and shut down, avoiding risk or change. Her swain, Carl (a good-natured, decent, reliable, unsexy?Wendell Corey), has been waiting for her to take a second crack at matrimony, and he?s starting to wonder if there?s more to her hesitation than grief. He likes the way Connie talks about Guy, the way she ?well? sort of keeps him alive,? until Steve Mason (Mitchum) wonders if that?s so great: ?After all,? he says, ?he?s not alive.?

And what is Mason doing at 165 E 75th Street? He?s a seasonal worker in the toy department of the store where comparison shopper Connie buys a gorgeous, fancy toy train?just like the one her son has been dreaming of (?I don?t even let myself think about it,? he says). But this isn?t for Timmy, it?s business. Mitchum is a veteran, a loner and nonconformist whose dream is to build sailboats at a little boatyard in Balboa, California. He has no family or friends, he is immediately attracted to Connie, and he immediately starts calling her on her bullshit.

He gets fired for not turning her in (comparison shoppers are to be fingered and banned), they have hot dogs for lunch at the Central Park Zoo by the seal house, and he lays out his philosophy and his ambitions. He helps her with her afternoon?s work, they get separated in the crowd, and he shows up at her apartment just as she is about to propose to Carl?sweetly but without a single shred of ardor.

The rest of the movie is the working out of their romance, mostly through two gifts?hers to him, a loud tie originally intended for Carl (ahem), and his to Timmy, the beautiful train Timmy doesn?t dare dream of.

I?d love to see the source material, ?Christmas Gift,? a short story by John D. Weaver, but a cursory search only turned it up in reference to this movie. The script is scaffolded around the two gifts: the tie conveying the passion that Connie can?t own, the train Steve?s invitation to a fresh start, powerful energy (locomotion; but let it be said that there is not a single shot of a train going into a tunnel), the risks and rewards of living full-throttle.

I credit director-producer Don Hartman with the low-key and naturalistic performances, particularly noticeable with the child actors. When Steve asks the little girl with the balloon on her head who?s rollerskating in Central Park on Christmas morning, ?Shouldn?t you be ice skating?? she replies matter-of-factly, ?I didn?t get ice skates.? Well, duh. And?Gordon Gebert,?who in his screen debut plays Timmy?manages a range of emotions without simpering or overselling.?He appeared in 12 movies in the next nine years, including?Come to the Stable, The Narrow Margin,?and?To Hell and Back, before quitting show biz to become an architect. There?s something surprisingly respectful about how the characters are treated. In most directors? hands Carl would have been either a bad guy or a shmoe, and we would have been invited to sneer at him because he?s so full of himself he thinks he?s good enough for Connie. But Carl is a right guy, he?s just not right for Connie. And the in-laws would have been an easy target, especially the mother-in-law. The cheap move would have been to make her a bitch, sniping at Connie and/or angry that Connie is betraying the memory of her dead son by finding new love.

Steve?s feelings for Connie move beyond simple sexual attraction to empathy when he?s raking her over the coals for her comparison shopper shtick and asks, ?Where?s your husband? Working his way through college?? and she says, ?He?s dead. He was killed in the war.? Steve survived the war that killed Guy, but, as he says, he lost five years to it, and you get the feeling that he?s drifting because he?s still not quite put back together (though it?s never explicitly discussed). Plausible backstory, and a life beyond the frame?the earmarks of good writing. The opening credits show the toy train on its track, with heavy snow falling (shaken by an unseen hand) onto the little PALM BEACH station, our first tip that we?re not in the real world but in the almost real, a plausible fantasy. The last shot is of a real train, festooned for New Year?s Eve, the shot from outside tracking Connie and Timmy as they search for Steve. They find him (a drunk pursuing Connie is gently detached) and the three embrace, together at last. And?scene. The ending credits return us to the toy train, completing the story?s transit and bringing the motif full-circle.

If you watch a lot of movies you see a lot of sloppy, poorly crafted stuff. Expedient plotting, wooden or wildly inconsistent characters, a lack of any organic sense of pacing or shape. It gives you a real appreciation for all the ways a movie can go wrong, and what a series of happy accidents, plus a steady hand in charge, are required to make a good one, especially one that stands the test of time (or in some cases looks better now than it did in its own time).

And I got that happy feeling when I watched this recent entry in the classic holiday movie catalog. It?s not a Great Film by any stretch, but it?s pretty darned good, particularly in terms of the writing and acting. So I wondered how it got that way. TCM said that?Holiday Affair?was a flop on original release, perhaps because the public wasn?t interested at the time in seeing Bad Bob Mitchum (recently out of jail after his pot bust) playing a romantic lead in a nice, wholesome Christmas movie. The studio hedged its bets with a poster that?s more noir than yuletide cheer.

Howard Hughes was so displeased with the box office that he canceled Hartman?s contract. Aha! I thought, and who was this Don Hartman? Might he account for the overall intelligence and unassuming class that hang about the proceedings?

The answer is a resounding maybe. That is, according to Hartman?s obit in the Lewiston, Maine Daily Sun dated March 28, 1958, he had started as a Borscht Belt performer and was an actor, gag writer, songwriter, and screenwriter. Hartman?s successful career in Hollywood, mostly at Paramount, included instrumental work on three of the Hope/Crosby Road pictures (Morocco, Zanzibar, and Singapore, prime entries in the series) and crafting Danny Kaye?s screen persona during a stint with Goldwyn (he wrote Kaye?s first three movies,?Up in Arms, Wonder Man,?and?Kid from Brooklyn). After he was fired by Hughes he was head of production at his old studio, Paramount, from 1951 to 1956, when he left to form his own producing unit, managing to release?Desire Under the Elms?and?The?Matchmaker?before his death in 1958. Pretty solid stuff, and a reasonable CV for that certain savoir faire I see in?Holiday Affair.

The other possibility is Brooklyn-born playwright/screenwriter Isobel Lennart, who, according to her TCM bio, did much of her work at MGM with producer Joe Pasternak, including?Anchors Aweigh,?the sort of credit that puts food on the table but makes an ambitious writer cringe a bit. The bio says: ??many of her screenplays do center on women optimistically coping with careers, families, and especially men who prove difficult because of possessiveness, addictions, finances, restlessness, or infidelity?? (East Side, West Side?comes to mind). Lennart?s greatest success was on the stage rather than on film: she wrote?Funny Girl?for Broadway and later adapted it for the screen. It?s not a stretch to see her hand in this as well, in the single mother supporting a small child, tired, uncertain, still grieving for her lost love.

The professional reviewers mostly sniff at?Holiday Affair,?calling it inoffensive, treacly, and in one review, ?manipulative,? and another ?derivative but harmless? (sheesh), leaving reappraisal to the bloggers. I think it?s an awful lot better than that. Blogger Josh, over at Signal Bleed, called it ?clear-eyed and unsentimental,? and I think that?s about right. I see a movie about people dislocated by war, one stuck, one drifting. If things work out he?ll settle down and she?ll loosen up. Maybe together they can bring the world back into balance.