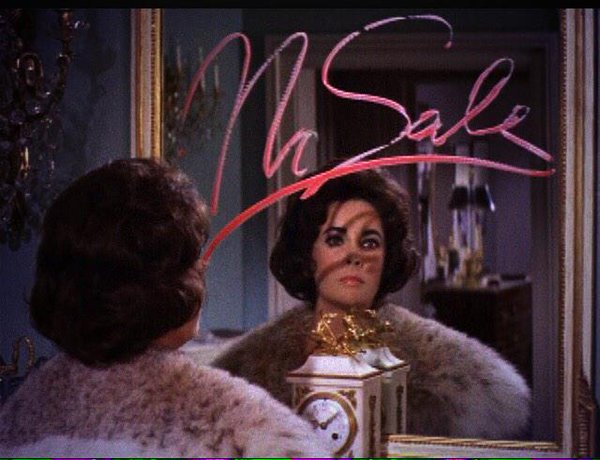 Elizabeth Taylor won two Best Actress Oscars, for?BUtterfield 8?(1960) and?Who?s Afraid of Virginia Woolf??(1966). The first she perhaps rightly dismissed as a pity vote. The second she won fair and square, and I hope it meant something to her.

Until fairly recently I never thought of Taylor as an actress, or rather I wrongly assumed she wasn?t a good one. This was not unreasonable, since when I was growing up in the ?60s she and Richard Burton were the Doug and Mary, or, God help us, the Brangelina of the decade and their real and imagined exploits screamed from the tabloids at every checkout counter. I wasn?t old enough to see most of their movies from this period with the exception of?The Taming of the Shrew?(1967), and I didn?t like it because that whole Kate getting put in her place thing rubbed me the wrong way. It still does. Gloria with her fans; Laurence Harvey stews while getting stewed.

The other thing that made me think Taylor couldn?t act was the?MAD Magazine?parody of?Who?s Afraid of Virginia Woolf??My first experience of many movies of the ?60s came via?MAD?s parodies, and those caricatures of Taylor et al (Sandy Dennis?s overbite was particularly hilarious) made the whole thing look so?silly.

Elizabeth Taylor was that last megastar who came of age during the studio era. Her stardom was so epic that it sort of drowned out anything else, like her acting. It has been a pleasure to find that in the midst of her turbulent life?eight marriages! countless near-fatal illnesses and injuries! diamonds as big as the Ritz!?she actually managed to turn in a number of respectable performances, several that are damned good, and at least one that wins her a place among the best ever.

In the 33rd Academy Awards the other Best Actress nominees were Greer Garson for?Sunrise at Campobello; Deborah Kerr for?The Sundowners; Shirley MacLaine for?The Apartment;?and Melina Mercouri for?Never on Sunday. Greer Garson works my last nerve, and her vocal impersonation of Eleanor Roosevelt in?Sunrise at Campobello?works nerves I didn?t know I had. I haven?t seen?The Sundowners?but assume Kerr was, as always, quite good, and I haven?t seen?Never on Sunday?and so cannot comment on Mercouri?s performance. For me the conflict would be with MacLaine, whose performance as Fran Kubelik is one of the great ones of its era and perhaps MacLaine?s finest; I have often wondered while watching?The Apartment?if she won any awards for it?it is without question Oscar-worthy.

As for?BUtterfield 8, Taylor HATED the movie, which she rightly thought vulgar and tacky. That?s not all it is, but I can?t blame her for how she felt about it. It was part of a particularly crazy period, even for Taylor, whose life was so crammed with personal tragedy, spectacle, and sheer nuttiness that it?s hard to believe. The previous year, Taylor?s third husband, Mike Todd, had been killed in a plane crash while she was shooting?Cat on a Hot Tin Roof.?Metro gave her one week off, then expected her back on the set to finish the movie. Taylor couldn?t wait to get away from the studio. She chafed under her handling. She had been at the studio since the early ?40s, had in fact grown up there, and she was more than ready to strike out on her own. Cat on a Hot Tin Roof: Giving him the slip

Eddie Fisher had been Mike Todd?s best man at their wedding, and he flew to Taylor?s side to comfort her in her grief. Apparently she found him pretty comforting?he dumped his wife, Debbie Reynolds, and married Taylor, who went from golden girl to whore of Babylon overnight. Perhaps it was no accident that MGM decided at this moment that her next movie should be?BUtterfield 8.

Eddie Fisher said in his memoir that he and Elizabeth hated the movie and called it?BUtterfield 4. She hated the script, she hated the character. And not without some justice?a lot of the dialogue is ripe for parody (I wonder if MAD ever did this one?), and I felt kind of bad for Laurence Harvey and Taylor, having to say that garbage.

BUtterfield 8?is a peculiar hodgepodge. It sounds like a promising piece of trash, a so-bad-it?s good, guilty pleasure sort of thing. And it has some moments that meet that standard, absolutely. But some of it it just run-of-the-mill, ordinary bad. Elizabeth Taylor, though, turns in a really good performance. Her Gloria starts out nasty, trading insults and blows with Harvey, her All-Twisted-Up-Inside* rich lover, the one she?s convinced offers her redemption, a solution to all her problems. But Gloria is dramatically rich as a character. She goes from vicious to tender to thoughtful to deeply wounded. It?s a really accomplished performance. First actor to get $!M for a movie, which was for some time the biggest money loser ever

I don?t think this is most people?s takeaway from?BUtterfield 8, though. The trashiness is so insistent?from the opening shots of a powder-blue phone with its receiver off the hook (will anyone understand that expression in a few years?), then those bright red, bold caps titles, then that CinemaScope shot of Taylor sleeping it off, her black hair silhouetted against white sheets? Like?Cat on a Hot Tin Roof, even more so,?BUtterfield 8?has a lot of shots of Taylor wrapped in a sheet, or running around town in a slip and a stolen fur coat (Harvey ripped her dress off on their first date), or wrapped in a towel, just out of the shower. Under the circs, expecting viewers to concentrate on her performance is like saying you read?Playboy?for the articles.

So, how did the whore of Babylon, 1960 edition, squeak out the win? After completing?BUtterfield 8, Taylor decamped?for England to make?Cleopatra. This is a story in itself. She had demanded $1 million, thinking they wouldn?t meet her price, but to her astonishment they did, making her the first actor ever to be paid $1 million for a role. She further sweetened the deal by adding in extra money should shooting go beyond schedule (it did) and by making the producers use Todd A-O, her late husband?s proprietary widescreen 70mm system, which she now owned. At the end of the day Taylor walked away with more than $2 million, as well as costar Burton. (Alas poor Fisher, I knew him Horatio.)

Anyway. there she is in England, and she contracts pneumonia, falls into a coma, and is only saved by an emergency tracheotomy that left her with a lifelong scar.

Her theory was that being widowed by Todd and almost dying trumped being a Jezebel, and she was probably right.

Meanwhile, MGM ended up with a hit: Whether the fickle public was mad at her or feeling sorry for her, they still liked seeing her standing around in her skivvies. And who could blame them? Taylor and Segal working out on the dance floor; Burton and Dennis sit this one out.

?Who?s Afraid of Virginia Woolf??was another story. It came in the midst of a string?of movies Taylor and Burton made together in the ?60s, most of them forgettable or unintentionally funny (now that I think of it, I also remember the MAD parody of?The Sandpipers). But this adaptation of Edward Albee?s play, directed by Mike Nichols, with its excellent ensemble completed by George Segal and Sandy Dennis, was unimpeachable. And 49 years later it?s still as refreshing as a splash of sulphuric acid .

Watching the two movies back-to-back last night I noticed that Gloria?s flinty nastiness is a preview of Martha?s in?WAOVW. The two characters share a ferocity, a wantonness and abandon, a willingness to go over the cliff, that is disturbing and impressive. If there?s one thing I didn?t expect from Hollywood?s biggest star it was that. Generally when beautiful actresses want to be taken seriously they play ugly characters. Nicole Kidman and Charlize Theron got Oscars this way. I think that to some Academy voters there?s nothing that screams integrity like a woman who has invested a lot in her appearance allowing herself to appear unattractive. Martha is different. It is an indication of Taylor?s epic status that she could go beyond just having a big nose or a scarred face?she *gained weight on purpose* for this role. It?s one thing when a man does it, but fat is still the far country where actresses are concerned. Also, she was only 34 at the time but allowed herself to be aged at least 10 years beyond her years to play Martha.

None of that would matter if Taylor?s Martha wasn?t completely demonic, a Fury come to life. But she is in her blowzy carnality, her complete lack of any warmth or kindness, her relentless need to humiliate her husband, a malignant force of nature. Until George undoes her completely with a few sentences that leave her shattered and pitiful.?Mike Nichols said Taylor was the most talented actress he ever worked with. Her rivals for the Oscar were both Redgraves?Lynn for?Georgie Girl?and Vanessa for?Morgan!?Anouk Aimee for?A Man and a Woman; and Ida Kaminska for?The Shop on Main Street. I have no idea what odds the bookies were taking that night, but in retrospect it?s hard to imagine an alternate outcome. Elizabeth Taylor won that Oscar fair and square, and while she continued to work for decades, her work ranging from decent to ill-conceived to laughable, she never again worked with a director of Nichols?s stature.

This was written for the fourth annual 31 Days of Oscar blogathon, hosted by Aurora at?Once Upon a Screen, Kellee at Outspoken and Freckled, and Paula at Paula?s Cinema Club. February 6 is for actors; February 13 for Oscar snubs; February 20 for craftsmen; and February 27 for Oscar-winning movies. Make sure to check out the other entries?lots of great stuff!