Barbara Stanwyck: Babs in the Boardroom 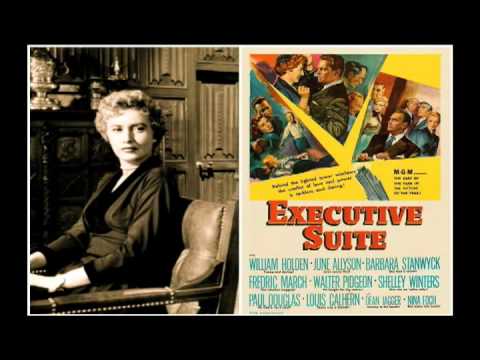 In 1948 Barbara Stanwyck?s screen debut was 21 years behind her. In those two decades she had navigated through two hugely successful incarnations: the first as the fresh-faced but wised-up pre-Code ing?nue princess of prisons, speakeasies, and lurid melodramas (with titles like?Illicit, Shopworn,?and?Forbidden); the second as a top-of-the-heap star rivaled only by Davis and Crawford as an actress with the confidence, verve, and ambition to play every kind of role, embracing even monstrous characters with total commitment, in every kind of movie from comedy to noir to melodrama. These two phases were each roughly a decade long, with the ingenue period dating from 1927-1937, and the peak period from 1937-1947. The third phase was a little shorter and marked her passage from a place at the center of the Hollywood movie universe to a satellite position. This was partly due to the dearth of roles for aging actresses and partly to the impending twilight of the studio system that had nurtured her. Not that she was going gently into that good night?Missy would go on for another 31 years, by the ?60s mostly in television, retiring finally in 1985 and leaving the planet a poorer place for her death in 1990.

I?m going to examine Stanwyck?s third phase?one most actresses don?t make it to?in which this brilliant actress, only 41, still attractive but unquestionably no longer an ingenue, finds suitable roles growing scarcer, by discussing two films. In the first,?B.F.?sDaughter?(1948), Stanwyck plays a sassy rich girl, a social niche she occupies competently but without Hepburn?s or even Davis?s effortless sense of entitlement. In the second,?Executive Suite(1954), she delivers a proper Stanwyck tour de force as a deeply depressed heiress whose inattentive lover dies, leaving her looking longingly at the ground below the open office tower window.??Both films place her in a milieu of wealth, success, and power struggles, and both give her the opportunity to explore characters whose lives are constrained by a glass ceiling so low it apparently precludes them from working at all.

Polly Fulton is the central character in?B.F.?s Daughter,?an A picture with some good dialogue and interesting observations about the importance of feeling needed and enough cliches and conventional plot twists, particularly a neat, abrupt ending, to keep it from being a first-rate movie.? Julia Tredway only has a few scenes (including the climactic final sequence) in?Executive Suite, but Stanwyck?s gravitas still allows her to anchor the whole movie. The role in lesser hands would have lacked the wild-card punch of Stanwyck?s all-in portrayal of a woman walking the edge of sanity, who ?seems as likely to end up in a straitjacket as to drag herself toward a narrow piece of solid ground.

Polly Fulton, B.F.?s little girl, is a manipulative behind-the-scenes dealmaker whose considerable intelligence and energy cannot get her a berth in her beloved daddy?s conglomerate (it?s never even discussed; we?re in the postwar era here, not the ?30s, and Polly?s pop thinks it?s best for her not to worry her pretty little head about anything except marrying an appropriate fella). All that leisure time (Satan?s workshop) leaves her longing to be needed, and she jilts her stalwart girlhood sweetheart for the vicarious challenge of making Van Heflin (of whom she once says, ?He?s nothing; he?s a blank check,? and elsewhere describes as ?Nobody, really?) a great man. She has learned a thing or two from her old man, though, and secretly bankrolls Heflin?s career as a lecturer, totally oblivious to the fact that she?s moving him around like a chess piece. Will she get with the program and give Heflin a few chances to provide for her, for a change? What are the odds?

Julia Tredway on the other hand?is a woman defined by grief, frustration, and the disappointment of loving first her CEO father and then his successor, both too single-mindedly focused on their company to pay much attention to her. Like Polly, she seems intelligent, though her energy level is hard to gauge, lurking perhaps beneath her veil of suicidal depression. Stanwyck doesn?t have that much screen time, but she controls our gaze whenever she?s on. It?s quite a feat to keep us looking when she?s silent, sitting way too still, lost in her own darkness, gazing down, avoiding the eyes of the men talking to her at the board meeting, but Stanwyck makes her despair as magnetic as her trademark incandescent rage when William Holden dares to invade the private sanctum of her hopelessness, urging her to hang on to her stock and use her deciding vote to secure the company?s future. Julia has a backstory a mile deep?she wears her neglect indifferently, like a second skin (?It?s second nature to her now, like breathing out and breathing in??).

Though neither of these movies are top-tier Stanwyck they?re both entertaining, and?Executive Suite?is a couple of notches better than that, with its Ernest Lehman script and stellar ensemble (Fredric March, Louis Calhern, June Allyson, and Shelley Winters).?B.F.?s Daughter?is dated all the way around, butExecutive Suite,?with its basic conflict between quality and responsibility to the company?s workforce on the one hand and short-term profits on the other feels pretty contemporary. Watching Stanwyck, the consummate professional (no diva hijinks with Missy), in these movies makes me wish she had found more roles in the late ?40s and early ?50s that were worthy of her incredible talent.