Anatomy of a scorcher: Mary Astor on Filming the Steamy Kiss in Red Dust 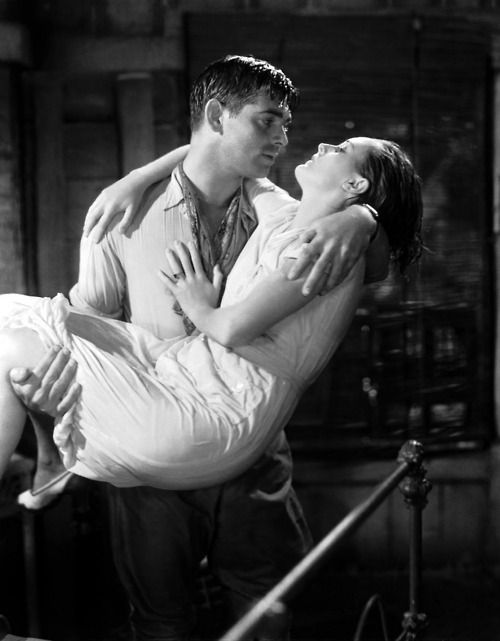 Mary Astor?s memoir?A Life on Film?is fantastic?she?s a wonderful writer, and her sharp observations on the industry and what went on behind the cameras are fascinating and incredibly useful to anyone who writes about classic film.

Astor writes of being asked by a bank teller, ?What was it like to kiss Clark Gable?? I?ve used her answer for this post, so please join me in welcoming today?s guest blogger, Miss Mary Astor.

?I was startled into blurting the exact truth, ?Good Lord, I?ve forgotten!?

?Oh, you couldn?t have!? Her face pinked up and behind the mask of lady bank teller I saw yesterday?s bobby soxer.

?Yes, I know that, but there was a rerun on TV last night?didn?t you see it? I should think that would remind you.?

I hadn?t seen it. I think I read in the TV listing about Red Dust being on around one in the morning.

I couldn?t just walk away from that disappointed face, so I smiled confidentially. ?It?s a long story,? said I. Let her read into that whatever she wanted.

Happily she fluttered her fingers in farewell as I went past the guard at the door.

In the car, my poodle, Jasper, was as usual pantomining ?What took you so long?? So I told him about it. I told him the lady had stirred up some memories.

Jean Harlow and that great introductory shot of her cleaning the parrot?s cage and saying, ?Whatcha been eatin?, cement?? And during the production, the tragedy of the death of her husband, Paul Bern, a gentle person who had filled her dressing room daily with flowers and little presents like hand-embroidered handkerchiefs. And Vic Fleming saying when she returned to work sometime after the funeral, ?How are we going to get a sexy performance with that look in her eyes??

Now I don?t claim to have total recall, but bits and pieces of what people said come echoing back, and it?s simpler to put it down as a sequence.

Stage 18?or was it 16??where the interiors were filmed; hot, no air-conditioning then, just big fans: damp from the constant use of rain machines. Vic being tough about our complains, ?So what! Everybody sweats in the tropics. Let it show, that?s the way it is.?

The Mason jar of moths released each scene to flutter and bat their way around kerosene lamps for realism. (Of course they preferred the brighter, hotter lights offstage and Props had to try and shoo them back into the scene.) ?Hi baby!? (Everybody was ?baby? to Clark, male or female.) ?Rhea wants you to call her tonight?some damn shindig or other on Sunday?wants you and Frank. O.K.??

?O.K. with me,? I said. ?Frank may have a baby to deliver?always happens when you plan something.?

We had completed several days on the back lot of the rubber plantation set. Shots of Clark carrying me through the mud, gasping from the force of the monsoon.

We had just finished the continuation on the stage inside where he carries me up the veranda steps into my bedroom, soaking wet, breathless.

In the script it probably read something like this: ?Close shot. He is about to dump her onto the bed, but her arms still cling. There?s a look. A faint, cynical smile crosses his face. This is the wife of his partner, but she?s been asking for it. He kisses her, gently at first, then fiercely.? Now Clark was a husky guy and a good sport, but it was not practical for him to be a hero and hold me up for the hour or so the shot would take to line up and shoot. So first of all, a stool had to be found which was the correct height to support most of my weight. Out of sight, of course; they were cutting about elbow high.

A prop man and a carpenter shoved a stool under my bottom as Clark hoisted me up, his right arm supporting me under my knees, his left under my shoulders.

From behind the cemera: ?Too high! Too high! Her head?s gotta be lower than his.? The carpenter started in with a saw on one of the legs.

?Wait a minute! Check it in the finder, first, Mac. Let?s see where you?re going to be, kids.?

?Make it fifty-fifty to begin with, Clark, then just before you kiss her, swing her an inch or two, so we get you full face.?

Vic said, ?Too much, too much?back just a little.?

Peering through the camera lens.

?Yes, you will. Just clear the key light on her neck. See it??

?Why don?t you move the camera?? asked Clark.

?I don?t want to move the camera. It?s a natural move, Clark.? Harlow on the Red Dust set with the parrot cage Astor mentions?.

Meanwhile a carpenter was taking a tape measurement from the bottom of my fanny to the floor, and getting the legs sawed off the stool. Lighting was being blocked in. And in those days there were lots of lights. We were hedged in by them, in fact. It was getting very, very hot.

Harold Rosson, the head cameraman said, ?You can step out for a minute, Clark and Mary. Give me the stand-ins.?

We cooled off and had a smoke in the big open doorway. I had my usual bad-tempered argument with the makeup man about too much makeup. He pursued me, carrying a powder puff like an extension of his arm.

Soothingly he said, ?The freckles are coming through on your forehead, Mary. Let me just touch it up with a?leetle?bit of pancake.?

?O.K., but no lipstick, Harry?you know what Mr. Fleming said. All that rain, I?d never have any makeup left.

Half an hour or so later, ?Ready to try it!? I went back onto the set.

?Clark?s on the phone. Step out of the lights a minute, Mary, but don?t go ?way.?

One of the prop men?in a raincoat?yelled from somewhere, ?You wanna wet ?em down??

?O.K., here?s Clark, let?s try it now. Everybody settle down.?Quiet!? Bells rang, doors were closed. It wasn?t very quiet. And it wasn?t really important until that final moment when the sound man said authoritatively, ?We are rolling.? Then it was quiet. Finally?what they got the big bucks for: that few seconds of the actual shot.

I hoisted myself up onto the stool. As Clark took his position he cracked, ?Hey, you?ve lost weight! That?s a relief!?

The head gaffer, kneeling under the camera asked Clark, ?This gonna be too hot?? Indicating an eyelight.

The gaffer grinned and said, ?Got anything in the fifth on Saturday??

Finally Vic came in from behind the camera so that he could talk to us quietly. And we started to think about the scene. What happened previously, relationships, emotional levels, etc.

?Let?s just move through it once,? Vic said. ?The look needn?t be very long, Clark?she?s very vulnerable?if she caught it she might start thinking. Mary, keep it simple. Real. Just?want?him.?

He turned and disappeared behind the lights. Hal Rosson didn?t like that. ?No rehearsal! Well, let me check their position when they kiss. We could move in, you know.?

Vic said, ?I don?t?want?to move in, goddamn it! I don?t want to move the camera. Let the?people?do it, not the camera.?

Rosson interrupted to say, ?Give us a look, people.?

Clark leaned his head close to me and our lips were barely touching. Loudly, he asked, ?How?s this?? I jumped a little and he said, ?Sorry, baby.?

?No good. We?re just getting the top of your head.?

We maneuvered fractional changes, our noses getting in the way.

?Hold it, hold it! That?s fine, if you raise her just a little?too much, too much. Right there, that?s beautiful, perfect.?

Clark whispered to me, ?That?s where we were in the first place.?

The assistant director checked his watch. It was getting close to lunch time. ?O.K., can we go? Let?s wet ?em down!?

Clark said, ?Here we go again, baby,? as we unwound and he helped me down from the stool.

We went over and stood just off the set in a shallow bathtub arrangement made of tarpaper and two by fours, and the man in the raincoat turned the hoses on us. After the heat of the lights, the water felt icy and we gasped and yelled as it hit us.

The assistant said ?Let?s go, let?s go! Let?s get ?em while they?re wet!? The makeup man popped in to wipe a drop off my nose. ?Git outta there, Harry!? Now it was quiet. Now we were ready to go. To do what they paid us all that money for. To use our acquired ability to concentrate, to focus all our thoughts and emotions on the scene.

It was pin-drop silence. Then somebody chuckled from behind the camera. Clark?s head jerked up, shocked, mad. Then the whole crew started laughing.

And we were, literally. The hot lights had vaporized the water on our clothes and skin, and it was rising in waves.

After the laughter and kidding and the joke was over, the problem remained. Everybody made a suggestion to solve it.

Then there was a question of lunch time. After lunch we were scheduled to move in to another set?a ?dry? scene. During lunch time I was to have my hair wet and a new makeup. If we waited until after lunch to get this sequence shot, the production would be held up for at least an hour for the hairset and makeup renewal. And time was valuable.

The problem was solved. The water had to be heated. Since the source for the hoses couldn?t be heated, we simply stayed in position with the lights on until we stopped steaming. To prevent our drying off the prop man kept us wet by pouring teakettles of warm water over our head and shoulders. Harlow and Astor sizing each other up

And the scene was shot. According to the script: ?He kisses her, gently at first and then fiercely.? And it was a print. ?Lunch everybody. One hour! Crew back in a half hour.?

The weird part of it all is that it never occurred to anyone, including Clark and me, that all this might have had a bad effect on the mood, or on our ability to play a love scene convincingly. But that?s the way it was. The way it always is. The way it is today, on any movie set.

So, dear Mrs. Bobby-Sozer, in answer to your question, ?What was it like to kiss Clark Gable?? I?m sure you can understand that it wasn?t much of a thrill. Of course if circumstances had been different and one afternoon he had grabbed me and pulled me behind a door where nobody would see us and said in that wonderful crumblly voice, ?Baby, you?re for me!? and (sigh) kissed me, why then I might have told you what it was like. And I?m positive I never would have forgotten.? I?d like to thank Miss Astor for sharing this excerpt from her memoir, A Life on Film, and participating in the blogathon! Thanks, Miss Astor, wherever you are!

This post was written for the You Must Remember This?A Kiss Is Just a Kiss blogathon, hosted by Second Sight Cinema. What a bunch of terrific posts?check ?em all out?here?