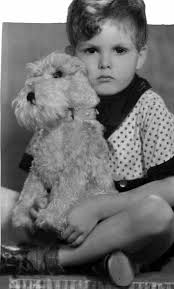 TCM?s tribute to Dickie Moore starts this morning at 6:15 a.m.

Dickie Moore?was one of those very rare people you can watch grow up onscreen, starting when he was 11 months old. That?s when he made his screen debut, playing John Barrymore as a baby in?Beloved Rogue?(1927), and his final notable film appearance was in?Member of the Wedding?(1952), when he was 27. His life on film spanned silents and the Pre-Code era, as well as Hollywood?s Golden Age (though his career high was in the early ?30s and he felt himself on thin ice starting at the age of 7?talk about peaking too early!). Moore was one of the ones who bucked the downward pull, surviving depression, substance abuse, and the trauma of inevitably growing out of being one of the cutest human beings on the planet, which meant losing his livelihood and the ability to support his family?and if you know how many child stars don?t make it, it?s quite an achievement. Life and time are cruel to child stars, and Dickie?s career never fully recovered from a nearly fatal bout of scarlet fever that kept him from working for almost a year. Moore was a sensitive kid, and the peculiarities of his life as a child star, which kept him socially isolated and put enormous pressure on him as his family?s main breadwinner, marked him in the same ways they did other members of that small fraternity?the child stars of the studio era.

with his mother, Marlene Dietrich, in Blonde Venus (1932)

How he survived is intriguing. During World War II Dickie?worked on?Stars and Stripes, the Armed Forces newspaper, and when the war ended he used his G.I. Bill benefits to go to college and study journalism. He knocked around in New York for a few years, trying desperately to get a second act, to become a successful television actor. Then Ralph Bellamy, who Dickie had worked with when he was 5, got him involved with Actors Equity and Dickie went to work for the union, revamping and editing their magazine. In 1988 he started a PR firm to represent union actors and successfully ran it?for 22 years.

In the early ?80s Dickie decided he needed to make sense of his own childhood and who it had left him. He started tracking down and interviewing other ex-child movie stars. He was looking for their Rosebuds, for the missing touchstone of childhood they each carried. He interviewed more than 30 of them, including old colleagues and friends like Matthew Beard (Stymie), Jackie Cooper, Shirley Temple, Jane Withers, Donald O?Connor, Mickey Rooney, Roddy McDowell, Baby Peggy, Bobs Watson, Peggy Ann Garner, Margaret O?Brien, and Natalie Wood. Roddy McDowell introduced him to Jane Powell, who Moore planned to interview. They quickly became inseparable, then married, and spent the rest of their lives together. Moore and Powell attend the reception and unveiling for the Al Hirschfeld permanent installation at The New York Public Library for Performing Arts, January 25, 2011. (Photo by Stephen Lovekin/Getty Images)

The book is?Twinkle Twinkle Little Star (but don?t have sex or take the car), and I?m reading it right now. It?s painstaking and unsparing?Moore?s journalist?s curiosity makes his book different from most Hollywood memoirs, in which people understandably focus on their own lives and work. But?TTLSexplores the lives of an amazing array of child stars, in their own words. Moore finds their common experience but also how they?ve lived out that experience in their own individual ways. Their stories are surprising, sometimes disturbing. They give me a new appreciation for these resilient people whose childhoods were so very strange and did so little to prepare them for life in the real world, the world beyond being unimaginably adorable. It?s a great read and you will never see these actors the same way again.

Moore passed away on September 7, five days shy of his 90th birthday, and when he breathed his last we lost one of our few remaining living links to the silent cinema, one of the last people who walked among us who had appeared in movies before they could talk. And before Dickie could talk, for that matter?

John Richard Moore Jr. (September 12, 1925 ? September 7, 2015) was one of the great child stars of Hollywood, particularly in the 1930s, and he belonged to a small, exclusive club of child actors in the heyday of the studio system. Despite his given name his family started calling him Dickie as soon as he was born, and to many of us he will always be Dickie. An astonishingly beautiful child, with huge dark eyes and a Cupid?s bow mouth, he starred or was featured in 62 movies by the end of 1935?when he was a few months past his 10th birthday?and had appeared in just over 100 films when he finally retired from the screen once and for all in 1952. As a Little Rascal, with Pete, who turned out to be played by Pete and all of his five kids (their eye circles weren?t all on the same side, which flew at Hal Roach but never would have passed muster at MGM) Fans of Pre-Code movies know Dickie very well?he spent a year under contract to Hal Roach, appearing in Little Rascals shorts, and said he never understood the jokes in the comedies, though everyone else on the set was laughing their heads off. He?s in?The Star Witness?(1931),?Union Depot(1932),?Man?s Castle?(1933),?So Big?(1932),?Million Dollar Legs?(1932),?Oliver Twist?(1933),?Gabriel Over the White House?(1933), and perhaps best known today, as fugitive cabaret singer Marlene Dietrich?s little boy in?Blonde Venus?(1932). But after his star had dimmed from its height in the early ?30s he worked with directors like Howard Hawks (Sergeant York,?1941) and Ernst Lubitsch (Heaven Can Wait, 1943), and he plays a small but pivotal role in (Out of the Past,?1947). Moore with Julie Harris in Member of the Wedding (1952)

If you can, pick up a copy of?Twinkle Twinkle Little Star. It?s not currently in print and in the wake of Moore?s passing they?ve jacked up the price, but in a few weeks things will settle down, and if you want to understand the reality of?being a child star in Hollywood?s heyday, this book is indispensable. Moore could?write, and he wasn?t afraid to drop the telling detail, even when it cast him as less than a paragon. It?s an honest book about trying to find yourself when you were famous?before you could read, and I think it would please Dick Moore to know we see him beyond his image in those films, where he is forever a beautiful child. Dickie Moore grew up to be Dick Moore, and it wasn?t easy.